Alec Baldwin stars as the infant executive in his new movie 'The Boss Baby'.

Alec Baldwin goes from playing the boss of the country on 'SNL' to playing the boss of a family with his latest film 'The Boss Baby'. He opens up about what it was like to play such an unusual character who is, by his own admission, anyone's 'worst nightmare'.

Alec Baldwin opens up about working on 'The Boss Baby'

Imagine if your baby brother turned out to be a suit-wearing, briefcase-carrying company executive. It's likely to be the worst thing that's ever happened to you. At least, that's the case with Tim Templeton when he meets his new sibling in this animated comedy.

'He's not only a baby, he's like your worst nightmare of a baby', states Alec, who lends his voice to said infant. 'He's a clever baby, he's a conniving baby, he's a Machiavellian baby.'

Watch the trailer for 'The Boss Baby' here:

It's a ridiculous concept, but that's lovable thing about studio animation. You can get away with just about anything as long as you've got the right people behind it. 'I loved doing this because it is just so nuts and the idea is just so silly but Tom [McGrath - director] is so clever in terms of how to pull that off, how to drive the film', Alec continues. 'It's got this wonderful heart inside of it too as I become won over by the idea of really being in a family.' 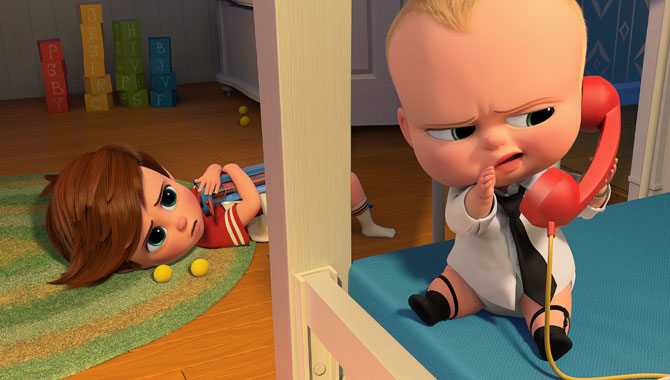 Alec Baldwin plays the titular role in 'The Boss Baby'

He is currently lending his voice to the forthcoming animation 'Arctic Justice: Thunder Squad' and is set to appear in 2018's 'M:I 6 - Mission Impossible'.

'The Boss Baby' is in theatres now.