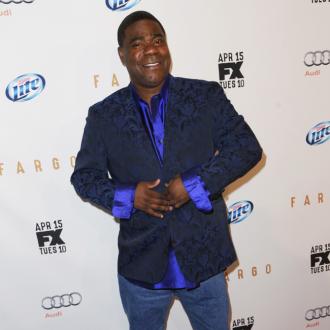 The former '30 Rock' actors made a special mention of their co-star - who is still recovering from a car accident last June in which he suffered a broken femur, broken nose and broken ribs - during the late-night sketch show's three-hour NBC special.

Alec tried to impersonate the 46-year-old actor and Tina made a heartfelt tribute to him.

She said: ''I wish my friend Tracy Morgan was here tonight. I know he was hoping he would be well enough to be here too.

''If he were here tonight I am sure Tracy would remind us that more than anything, he would like to get us all pregnant. See you at the 41st, Tracy. We love you.''

The show also saw Eddie Murphy greeted with a standing ovation as he took to the 'SNL' stage for the first time in 30 years and admitted the programme will always be a big part of his life.

He said: ''Isn't this an incredible night? This show is a big part of who I am and my life.

''I'm so happy to be back here. I feel like it's going back to my old high school again. I will always love this show.''

He was introduced by fellow comedian Chris Rock, who said: ''When I was young, I didn't think comedy was a job. And then I saw Eddie Murphy on Saturday Night Live and it changed everything.''

Bradley Cooper and Betty White shared a smooch during sketch 'The Californians', which also featured Kerry Washington and Taylor Swift, who played an actress who chewed on her own hair.