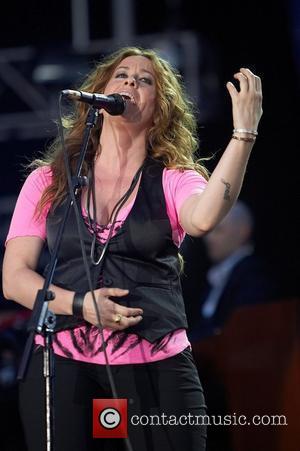 Alanis Morissette enjoyed covering THE Black Eyed Peas' hit song MY HUMPS - because creating the parody provided respite from her own over-emotional songwriting process.
The Ironic hitmaker caused an Internet sensation with her 2007 down-tempo version of the track and its accompanying music video, which garnered over a million views in the week after its 02 April (07) launch on YouTube.
And the Canadian singer insists the creation of her moody rendition was a therapeutic experience.
She says, "I was in the studio with (producer) Guy Sigsworth and he would say, 'What horse from the apocalypse are you bringing in today, Alanis?' Because every song was this tsunami of emotions.
"So I said, 'I wish I could just write a really simple song - a song like My Humps.' Then we had a pregnant pause, looked at each other, and said, 'All right, let's do it!'
"Within moments we were recording the piano version of it, and within a week we were shooting the video in my garage here at my house."