Alanis Morissette is prepared to breastfeed her 17-month-old son, Ever Imre, until he is six, if he chooses. 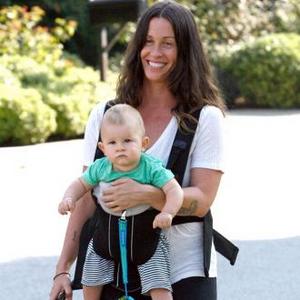 Alanis Morissette is prepared to breastfeed her son until he is six.

The 'You Outta Know' singer believes attachment parenting is important for 17-month-old Ever Imre's wellbeing and will continue to feed him from her breast until he decides to stop.

She told 'Good Morning America': ''I'll stop whenever he wants. I know some children who have weaned naturally at two years, some kids wean naturally a couple of years later; I mean, it's up to every child.''

In the western world, most children start to be weaned away from breast milk around six months after their birth, but those who follow attachment parenting believe letting their baby choose is best for their long-term emotional welfare.

Alanis - who is married to Mario 'Souleye' Treadway - added she doesn't judge other people for not sharing her views on parenting.

She added she is ''in a privileged position, where I can afford the time and to pay for the resources that would support this kind of lifestyle - that's not possible for a lot of families.''

Alanis has also previously admitted Ever still sleeps alongside her in bed, saying: ''We're definitely skin-on-skin connected as much as possible.''

However, despite her dedication to attachment parenting, the 'Ironic' hitmaker insists it doesn't stop her finding the time to be intimate with Mario.

She added: ''He's a very robust virile man. You gotta take care of your husband.''