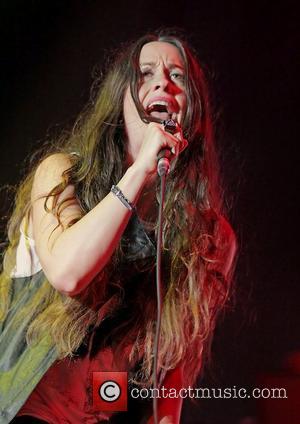 Alanis Morissette was so severely affected by post-partum depression following the birth of her first child she felt physical pain and struggled to complete even basic tasks.
The Ironic singer welcomed son Ever in 2010, and has admitted she struggled to get to grips with motherhood after being overwhelmed by post-natal depression following a "harrowing" home birth.
Now the star reveals she felt so low she was left in pain and was despondent about the world around her.
Morissette tells British magazine You, "I had a natural birth at home in my bedroom. It was very long - over 25 hours - and harrowing. Not unusually for me, I was silent, so it felt like this long drug trip of a prayer that was physically excruciating. My husband saved the day. When I asked him, he would squeeze my head. At other times he would just be there and that was all I needed.
"The degree and intensity of my post-natal depression shocked me. I am predisposed to depression, but what surprised me this time was the physical pain. I hadn't realised the depths to which you can ache - limbs, back, torso, head, everything hurt - and it went on for 15 months. I felt as if I was covered in tar and everything took 50 times more effort than normal.
"I wished I could have cried but there was no relief during that time; my version of depression is almost below crying where there is just despondency... I had various therapies and now I feel all light and springy. Thankfully, it didn't interfere with the bond with my son, although I think that has strengthened since I got better in April."