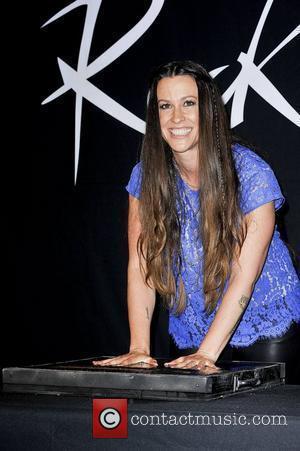 Alanis Morissette will continue to write songs until she lays on her deathbed, reports The List. The singer has also described her depression when not writing new material.
"I'll be writing records until I'm dead, whether people like it or not! I can't not write, if I don't then I get really depressed. I'll keep going, I promise!" said Morissette, who recently released her eighth studio album Havoc and Bright Lights. Alanis, after a lengthy hiatus from the scene, is also very happy with the amount of prominent female artists in the music business; "I'm excited about there being more of a sisterhood these days," she explained. "Back in the '90s there was a lot of hate - the women I looked up to as artists were dissing me! It's not so patriarchal these days - there's more love and a lot less hate!"
Her new album incorporates many aspects of the singer's long career. "This record definitely feels like an integration of parts of my previous records. As a kid I was listening to Aretha Franklin, Etta James and hip-hop as well as music my parents were listening to like Joni Mitchell and Leonard Cohen. Obviously I live for big pop choruses as well, so the whole thing feels like a bit of an arrival point." Reviews for Havoc and Bright Lights have been mixed, with our own review, here at Contact Music, giving it an impressive 8/10. Elsewhere, other reviews have been less kind, with the Guardian saying "there's a lone belter in the anthemic, power chord-heavy Guardian, but for the most part these songs are entirely lacking in bite, dragging through limp soft rock and even softer sentiments and reaching their nadir in the execrably squishy ballad Til You."