He stars alongside Helen Mirren in a moral-testing war drama.

It's a sad day for the world of film as we lose yet another giant of the entertainment industry, but at least we get to see Alan Rickman in one last live action role with the Spring release of modern war thriller 'Eye In The Sky'.

It follows a UK-based military intelligence official, Colonel Katherine Powell (Helen Mirren), in her mission to capture a group of wanted terrorists in Kenya. With their own advanced drone technology, she and Lieutenant General Frank Benson (Rickman)- led by American drone pilot Steve Watts ('Breaking Bad' star Aaron Paul), are able to spy on their base only to discover that their mission has taken an unfortunate turn of events.

After realising that the terrorists are in fact planning a suicide bombing, they are forced to change the operation to an assassination in order to save a huge amount of people. But, in a cruel twist, they notice a civilian girl playing in the vicinity of the terrorist headquarters and now they are forced to make a decision that will prove deadly to innocent lives either way.

Watch the trailer for 'Eye In The Sky' here:


With collateral damage a major possibility, neither Powell nor Watts are comfortable making a fatal move on their targets. It might be a matter of taking one innocent life to save many, but killing a child is likely to exacerbate the conflict while not making a move and allowing the terrorists to commit their terrible crime could prove useful in terms of propaganda. It's the ultimate moral dilemma. 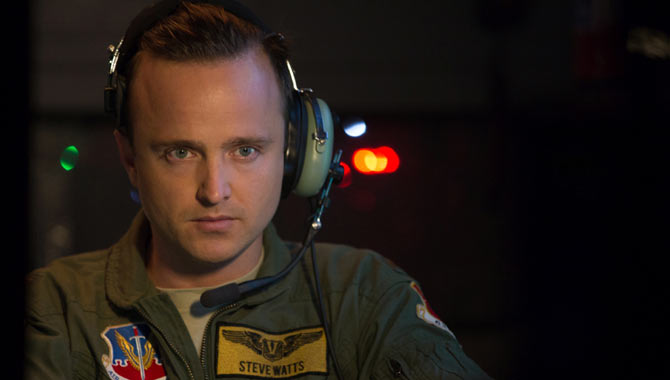 Aaron Paul plays a drone pilot in Eye In The Sky

Shot in in South Africa, the movie has been directed by BAFTA nominated Gavin Hood ('Ender's Game', 'X-Men Origins: Wolverine'), with Guy Hibbert ('Five Minutes of Heaven') on the screenplay. Plus, Colin Firth is one of the producers, an actor who previously starred with Rickman in 2003's 'Love Actually'.