His soul may have left us, but his humour will live on.

Turn those tears of sadness into tears of joy with this little reminder that the dearly departed Alan Rickman was actually one of the funniest and nicest guys around. And it wasn't just on screen either; he was also up for a bit of fun and hence he turned every job into a memorable experience for all he worked with. There was a lot more to that sonorous tone and moody glare than met the eye.

1. Inhaling helium with Jimmy Fallon: Just less than a year ago, Rickman appeared on 'The Tonight Show Starring Jimmy Fallon' armed with a pair of helium balloons. In response to Fallon and Benedict Cumberbatch doing Rickman impressions on a previous episode, the actor made Fallon apologise in the most hilarious way possible. Rickman also had a go at the helium, though it has to be said, even that didn't have much effect on his rich vocal.

2. Pranking Daniel Radcliffe with Michael Gambon: The fact that he has such a boyish sense of humour was also made clear during the filming for 'Harry Potter and the Prisoner of Azkaban'. During the Great Hall/sleeping bag scene, unbeknownst to Radcliffe, director Alfonso Cuarón with Gambon and Rickman had placed a remote control fart machine in Radcliffe's sleeping bag. While Gambon was pretending to do a take, he activated the machine while Rickman chuckled uncontrollably behind him. If you've never seen Professor Snape giggle like a mischievous child, you haven't lived.

3. Discovering Rupert Grint's unflattering doodles: A story that has resurfaced in interviews time and time again. During filming for 'Harry Potter and the Philosopher's Stone', Rupert Grint - who was terrified of his older co-star as an 11-year-old - was caught by Rickman himself drawing an extremely unattractive portrait of him. Grint still remembers to this day how frightened he was, but Rickman merely made him sign the picture and then kept it. Aww!

4. Defending Judge Turpin: Unfortunately (or fortunately, depending on how you look at it), if you look as formidable as Alan Rickman, you're going to get asked to play a lot of bad guy roles. One of those was Judge Turbin in Tim Burton's 'Sweeney Todd', and he admitted in a press conference that he has to avoid judging his characters. 'I think he's a sweetheart', he laughed. 'I don't chop anybody up and eat them!'

More: Watch Alan Rickman in his latest film 'Eye In The Sky'

5. Galaxy Quest: On a less miscellaneous note, he was pretty damn funny in his actual movies too. Playing a diva-like actor who stars as an alien in a Star Trek-esque TV show, he certainly steals every scene he's in. In case you needed a reminder, some of his funniest lines included 'MINERS, not MINOR!' and 'You broke the ship. You broke the bloody ship.'

6. Love Actually: Okay, so's he's a bit of a heartbreaker in this film, but that scene where he asks for a necklace to be gift-wrapped at a jewellery stand is priceless. Of course, Rowan Atkinson delivers most of the humour with his eccentric and time-consuming gift-wrapping skills, but the moment Rickman exclaims 'Almost finished?! What else is there gonna be, are you gonna dip it in yogurt? Cover it with chocolate buttons?' is one of his finest. 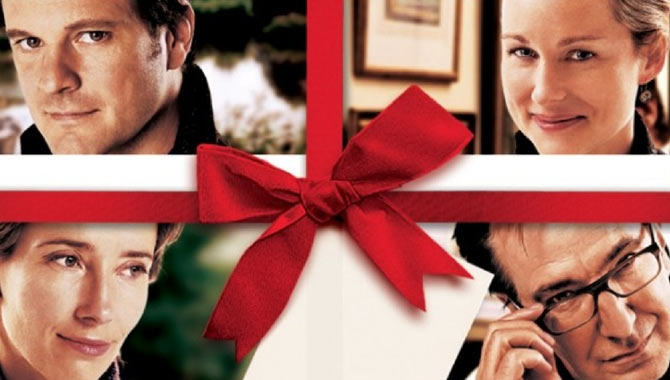 He definitely had his moments in 'Love Actually'

7. The Search For John Gissing: Pretty much every scene featuring Rickman - the titular businessman - is a hoot whether he's trashing his office, dancing or spraying coffee in people's faces. If that film's not worth a re-watch in tribute to him, we don't know what is.

8. Dogma: Sure, he doesn't have the biggest part in this 1999 Kevin Smith comedy, but he certainly has the best. The entrance of his angelic character Metatron is hilarious from start to finish. From his frequent blasphemy after getting sprayed with 'flame retardent chemicals' ('Sweet Jesus! Did you have to use the whole can?!') to his insistance that he's not a rapist ('Angels are ill-equipped'), this is another Rickman special that ought to be re-watched.

9. The Hitchhiker's Guide to the Galaxy: Honestly, even the biggest 'Hitchhiker's' purist cannot deny that his vocal take on depressive, paranoid android Marvin in the re-make is a hilarious interpretation with gems such as, 'Life? Don't talk to me about life!' and 'Here I am, brain the size of a planet, and they ask me to take you to the bridge. Call that job satisfaction, 'cause I don't', all delivered in that low-pitched, Rickman drawl.

We are so going to miss him.