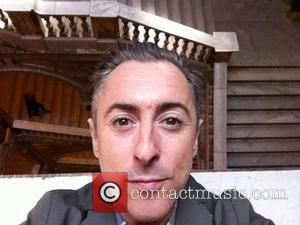 Alan Cumming is one of the most experienced actors you'll find, but even the 47 year-old Tony Award winner has set himself a challenge by appearing in a version of Shakespeare's 'MACbeth' where he'll be playing no less than three different roles. No wonder he's described it as "truly the most difficult thing I've ever done".
The roles will also mark Cumming's last time performing the play, something poignant given that he made his stage debut playing the character Malcolm in a version of it in 1985. The actor told The Press Association, "I don't think I'll be doing 'MACbeth' again in my life. I mean, I might do this again, but I doubt I'll do another production of 'MACbeth' again. I think I've got it out of my system." The actor won a Tony back in 1998 for his part in Sam Mendes' revival of the play 'Cabaret,' and 'MACbeth's' co-director John Tiffany claims that his class is still there 14 years on. "There's a fearlessness there that means that he's unpredictable. It's also the fearlessness that makes you want to embark on a project like this with him even though it is nuts and even though you are climbing a mountain with no legs," he says. "You know he'll never waiver. He'll never give up."
Describing how he was planning on approaching playing the MACbeth role itself, Cummings explained "This production definitely has made MACbeth seem - not sympathetic, necessarily, because you hear of these terrible things he does - but you can see someone who was quite damaged to begin with getting more and more damaged."