For those not in the know, Alain Johannes has been in the background of some fantastic albums and bands, most significantly Queens of the Stone Age. Johannes' impressive CV also boasts production credits in the back catalogues of bands such as No Doubt and Arctic Monkeys. He played an instrumental role in Chris Cornell's solo debut Euphoria Morning (before he went hip-hop) and did a similar job on Mark Lanegan's last solo effort Bubblegum, and is engaged in a similar role on his highly anticipated upcoming album. After touring as second guitarist with Them Crooked Vultures, on Spark, Johannes finally steps out of the background to show everyone his true skill as a musician, on his own. 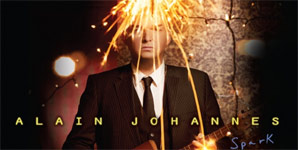 Spark consists of eight songs, mainly featuring sparse arrangements of voice and acoustic guitar, with little else added. You could say this is his Nebraska, but other than the fact that it is a largely acoustic record, there are few other comparisons one can draw. Album opener Endless Eyes and track two, Return to You are showcase a style that is a little more upbeat than you might expect having heard some of his other work.

It is not until track four, Make God Jealous, featuring frantic, jumpy strumming, and quite frankly breath-taking guitar work that you get a real sense of his true genius. Put simply, Alain Johannes is a virtuoso at his instrument. This further cemented on Spider, a sparse and delicate song, with some impressive vocals.

Spark then, is a brilliant (if a little short) album which really does Johannes' talent justice. We can only hope that he decides to release more of his own music rather than fading away into the background again.