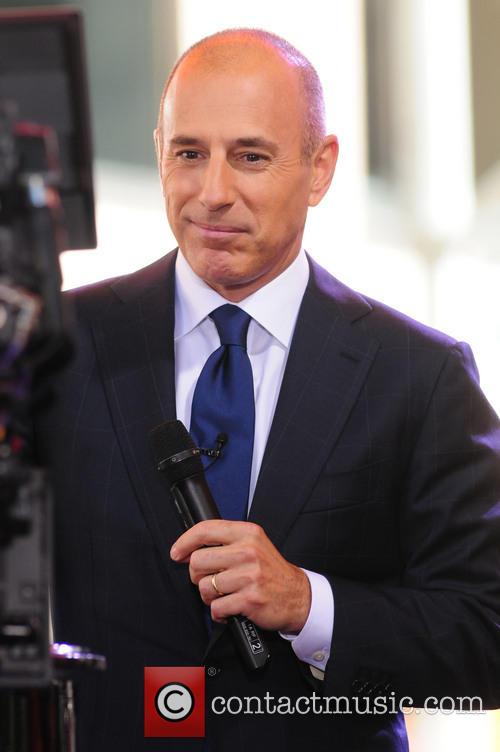 Mariah Carey looked stunning in a shimmering light blue gown on the red carpet at the 2014 Fresh Air Fund Gala held at Pier Sixty at Chelsea Piers in New York. The dress featured a daringly plunging neckline and Mariah teamed her outfit with a pair of silver fingerless gloves. She could be seen having her hair repeatedly combed by an assistant and talking to a reporter. 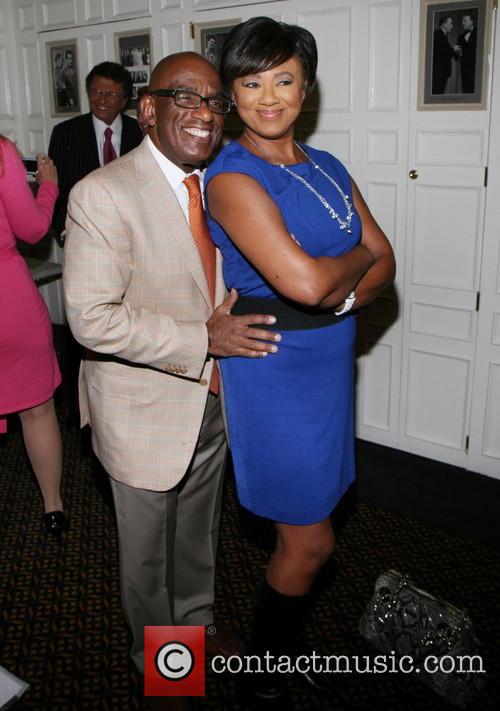 Al Roker Soiled Himself At The Whitehouse

By Jack de Aguilar in Lifestyle / Showbiz on 08 January 2013

Not many people would openly admit to soiling themselves, let alone on a visit to the Whitehouse (the soiling, not the admitting), but good old Al Roker tells it like it is. And how is it? He crapped himself.

Never one to shy away from the hard-hitting matters, Al Roker admitted that some matter hit his pants on a visit to The Whitehouse. Jokes aside, though, the unfortunate toilet incident was down to some previous gastic bypass surgery that Roker, 58, had. "When you have a bypass and your bowel has been reconstructed, you think you're pretty safe," he explained. "I probably went off and ate something I wasn't supposed to." Roker was talking in an interview on NBC with Dr. Nancy Snyderman. As he was walking to the press room, he felt like he had to "pass a little gas here. Only a little something extra came out," he said. "You pooped in your pants," said Snyderman. "I pooped my pants," confirmed Roker. "Not horribly, but enough that I knew."

And how did he deal with the situation? Like a consummate pro, that's how. "Which is a common side effect of this surgery," Snyderman said, talking of his bypass. "Exactly," he said. "So, I was panicking. So I got to the restroom of the press room, threw out the underwear and just went commando."

By Michael West in Lifestyle / Showbiz on 08 January 2013

Well, this is embarrassing. Long-time Today show correspondent Al Roker has recalled how he was caught short during a visit to the White House, resulting in a very messy pair of pants. The 58-year-old told Dr Nancy Snyderman on Dateline that he accidentally pooped himself while visiting the historic residence.

“I probably went off and ate something I wasn't supposed to…And, as I'm walking to the press room, I've got to pass a little gas here. So, I'm walking by myself — who's going to know? — only, a little something extra came out.” “You pooped in your pants,” said Snyderman, who later confirmed it as a common side effect to the gastric bypass surgery that Roker underwent in 2002. Nevertheless, the newsman was sure to put the accident into context, saying, “[I didn’t poop] horribly, but enough that I knew.” Thanks for that Al!

The correspondent has been pretty vocal since the segment aired, initially directing his Twitter users to the NBC show, tweeting, “Tune [into] Dateline. Now. Please.” Later, he discussed his surgery on Facebook, saying, “Folks need to know the lengths people will go to lose weight. A bypass is no easy answer and has a lot of consequences; some embarrassing, some lethal.”

By Hayley Avron in Lifestyle / Showbiz on 28 November 2012

What more could the 28 year-old BAFTA Award-winning actress possibly want out of life, we hear you cry (other than maybe a Golden Globe... or an Oscar). Well, according to Entertainmentwise, the Lost In Translation star has always wanted to be a weather girl and Al Roker’s well-timed absence from The Today show gave her the perfect opportunity to do that.

Johansson was appearing on the daytime show to promote her new movie Hitchcock and jumped at the chance to read the weather for them, as Al Roker was suffering from laryngitis. When asked if she had enough experience to take on the momentous task of filling Roker’s shoes for the day, Scarlett joked “I have a lot of experience with the weather, yes.” She then said that it was “a dream come true,” to do with the weather with Al Roker, before she was hastily corrected: “oh no, you’re doing the weather FOR Al Roker!”

Embarrassment On Today As Steven Tyler Drops The F-Bomb

Steven Tyler might've spent the last couple of years slouched on a chair at the judging table of American Idol, but the Aerosmith front man hasn't lost his rock and roll attitude! If rock and roll means cussing early morning on American television anyway.

Tyler and his band were performing during the show's 8 o'clock hour, a pretty early time to be out of bed for normal people, never mind veteran rock stars, specially not ones planning to drop the F-bomb live on television. The moment came when Al Roker was giving the weather update, at which point Tyler revved up the early morning crowd who'd turned up for their first song by saying "Hey y'all...Thanks for coming out, you crazy f**kers," which could be heard against the backdrop of a weather map.

"What did he just say?" Roker asked. "That's why they haven't done mornings." It wasn't the only gaff that Tyler made either: as the show opened up, he could be seen sing-songing "good morning, America!" in reference to Today's bitter rivals. Oops. An embarrassed Roker claimed "That's why they haven't done morning television! They don't even know what show they're on!" We get the sense that Tyler might've just been being a bit devilish.

Willie Geist has been named as the new co-host of the 9am hour of NBC’s morning show 'Today'. Jim Bell, the show’s executive producer made the announcement, revealing that Geist will start in his new role as of November 12, 2012. Geist, 37, will join Al Roker, 58 and Natalie Morales, 40 as co-presenter of 'Today'. In his statement, Jim Bell said “"We are thrilled to add Willie to the 'Today' team… He brings a solid news background with a keen sense of creativity and humor. From politics to pop culture, Willie is a skilled and versatile reporter who will make a great addition at 9 a.m. and contribute to the entire broadcast.

According to US magazine, he’s going to carry on working as one of NBC’s main News contributors, as well as the NBC Sports Group. He’s also going to remain as co-host of MSNBC’s 'Morning Joe', where he has been covering national politics since 2007. Geist has long had a decent reputation amongst NBC’s ranks but excelled himself this summer, when he anchored NBC Sports Network’s coverage of the 2012 London Olympics. Earlier this year, Today show veteran Ann Curry, 55, was fired from her post on the show as Matt Lauer’s co-anchor. She had been with the show for 15 years and was replaced by Savannah Guthrie, 40.

Willie Geist‘s wife is his childhood sweetheart, Christina Sharkey. They wed in 2003 and have two children together. 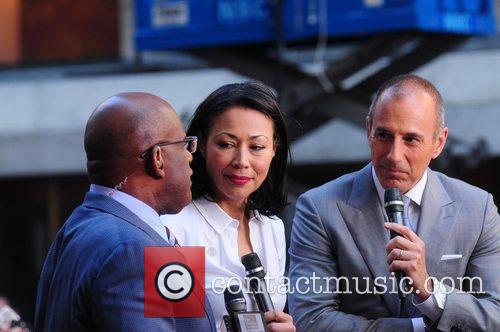 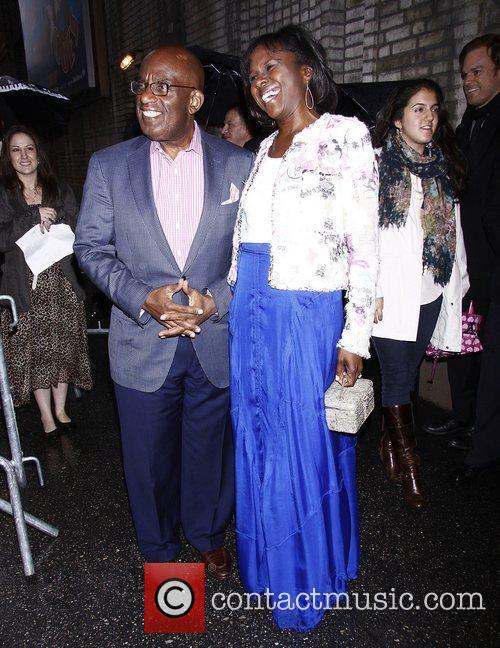 Presenters from The Today Show at Barnes and Noble for a book signing in New York. The six news anchors stood for photos together, with Al Roker holding the book, called: From Yesterday to TODAY: Six Decades of America's Favorite Morning Show. Ann Curry joked about the number of photos being taken, with one photographer pointing out that people blink.

The other anchors in attendance at the book signing included Matt Curry; Kathie Lee Griffin (who was late arriving); Natalie Morales and Hoda Kotb.

NBC's The Today Show paid tribute to the Royal Wedding between Prince William and the Duchess of Cornwall, Catherine Middleton, by dressing up as the British Royal Family as part of their 2011 Halloween Special. Natalie Morales dressed as Pippa Middleton, in a recreation of her famous bridesmaid dress, while Al Roker donned a replica of Prince Harry's suit. Former host Meredith Viera even got in on the action too, portraying Queen Elizabeth II.

Savannah Guthrie made for an unusual looking Prince Charlies, while Kathie Lee Gifford came as Princess Beatrice, complete with the head turning hat. 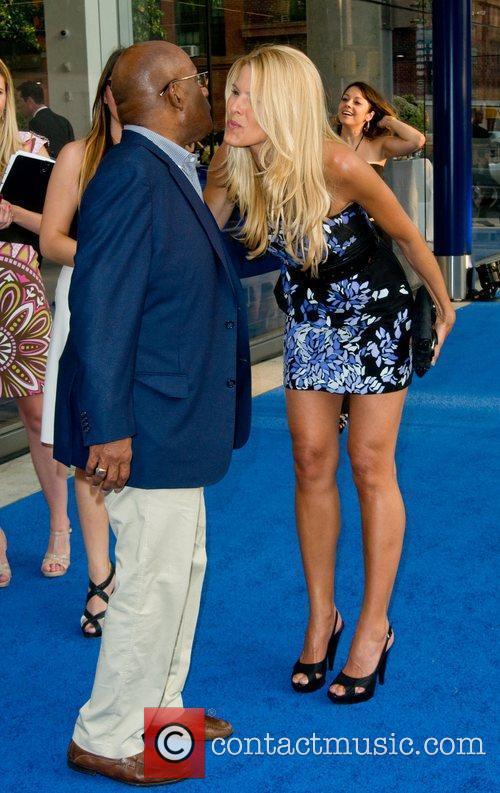 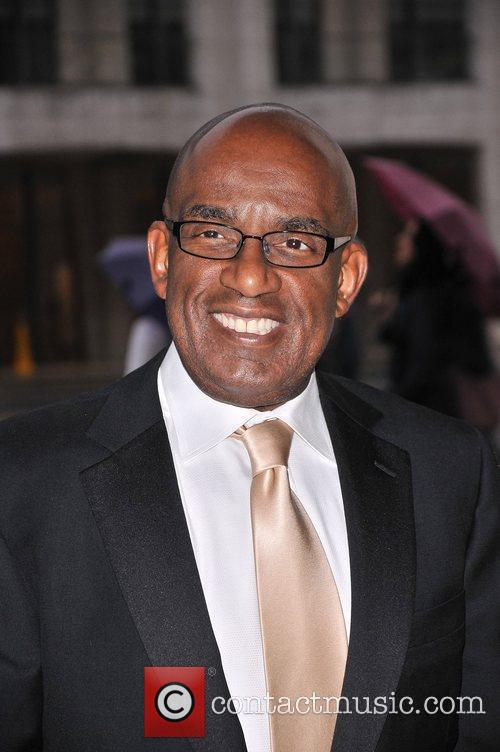 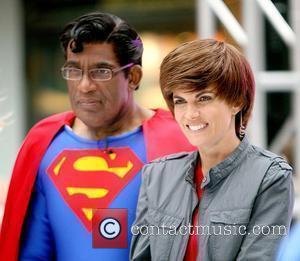