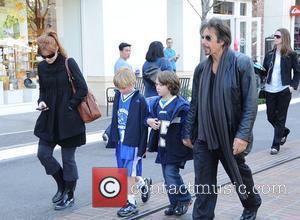 Picture: Al Pacino shopping with his family at the Grove Los Angeles, California - 07.02.09

Al Pacino is set to wow theatregoers in his native New York - with a series of live performances in the city's Central Park next summer (10).
The Oscar winner is the headline act at 2010's Shakespeare in the Park series, playing Shylock in The Merchant of Venice - a role he played on the big screen back in 2004.
Pacino will be joined by Law & Order stars Jesse L. Martin and Ruben Santiago-Hudson, No Reservations' Lily Rabe and actors actors Jesse Tyler Ferguson and Max Wright.
The Merchant of Venice will alternate on the Central Park stage with a production of Shakespeare's The Winter's Tale.
The Public Theater series will run from 9 June to 1 August (10).