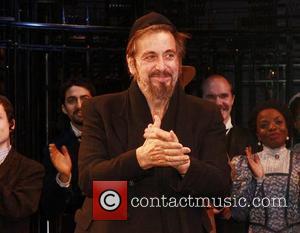 Al Pacino quit work on Oscar-winning heist movie Dog Day Afternoon during a drinking binge in London - and he was only tempted back to the set after a producer persuaded him to read the script sober.
The veteran actor signed up to play a bank robber in the 1975 drama in a role that won him an Academy Award nomination, but he changed his mind during a booze-fuelled night out.
Producer Martin Bregman refused to give up on Pacino and eventually was able to persuade the actor to return after ordering him to quit drinking.
Pacino tells talk show host Larry King, "It was during one of those episodes of drinking in London that I turned down Dog Day. I actually turned it down. I said I don't want to go into a bank, rob a bank and do all of that stuff...
"I actually turned it down after I said yes. And I was very lucky I had someone like Marty Bregman and (director) Sidney Lumet around...
"They understood I wasn't going to do it. I quit and they got somebody else. During the course of this time, Bregman was on me, on me, on me. I said, 'Marty, I don't want to do this'. He said, 'If you stop drinking for a while - could you just stop for a while... and read the script'. I said, 'OK'. He said, 'No, I mean it, just don't drink'.
"I didn't drink for a couple (of) days and I read the script. It was clear. I said, 'Why am I not doing this? I should be doing this'. And I called him, I said, 'You know, Marty, you're right, this is a great script'. He said, 'OK. Talk to you later'. Boom. And he got on it. And he somehow wangled and wiggled as only he can... and I was very lucky I had him there."