Veteran Actor Al Pacino Learned Early On He Wasn't Cut Out For A Broadway Musical After Flubbing The Lyrics During A Disastrous Audition For 1968'S Zorba. 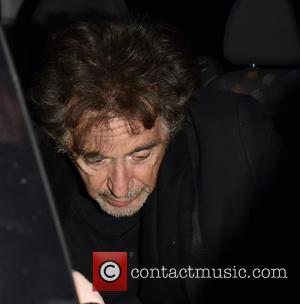 Picture: American actor Al Pacino who has starred in movies such as 'The Godfather' and 'Scarface' was snapped as he dined out at Scott's restaurant in...

The Scarface star's former manager, Stevie Phillips, recounts the embarrassing incident in her new autobiography, Judy & Liza & Robert & Freddie & David & Sue & Me...: A Memoir, revealing Pacino tried to impress production director Hal Prince by belting out a rendition of Guys and Dolls hit Luck Be a Lady - only to forget his lines and be booted offstage.

"The stage manager was now coming out with the hook, a heavy right arm with which he 'escorted' Al off the stage. Al innocently asked: 'So how do you think I did...?' At last I said, 'Al, I don't think a musical is your thing.'"

The lead role eventually went to Herschel Bernardi, who earned a Tony Award nomination for his performance in the Kander and Ebb musical. Anthony Quinn went on to lead the cast in a Broadway revival in 1983.

Pacino later conquered the Great White Way in a series of dramatic roles, including Does a Tiger Wear a Necktie?, Camino Real, Salome and William Shakespeare play King Richard III.

He only recently tackled his singing fears in the film Danny Collins, in which he plays an ageing rock star.