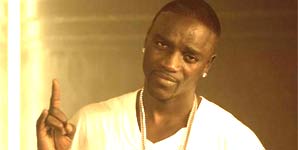 Akon is readying his much anticipated follow-up to his multi-platinum epic smash CD Trouble. The new album, Konvicted is scheduled to hit stores on November 21.

The first single, Smack That, features none other than hip hop icon, Eminem. The video for the new song, considered by many to be one of the hottest releases of the fall, is helmed by revered video director Benny Boom. Other guests on the new album include Snoop Dogg and Styles P.

Akon scored unprecedented success in 2005 both here and abroad, with his multi-format smash hit single "Lonely," and its predecessor "Locked Up," becoming sizzling staples of urban, pop, digital and international radio formats across the globe.

The audio streams for this promotion have now expired but you can watch the video for the single here!