Filming On The New Series Of Poldark Has Reportedly Been Disrupted By Nosy Onlookers. 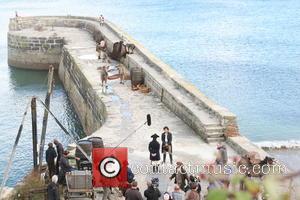 The second season of the hit British show is currently being filming in Cornwall, England.

However, reports suggest fans with camera phones have been getting in the way of the crew.

The crowds of onlookers is believed to have been attempting to take pictures of hunky star Aidan Turner.

"Unfortunately a lot of people have been watching and taking pictures while filming and using flashes which I know has halted filming," Simon Williams, manager of local pub the Harbourside Inn in Charleston, tells British newspaper the Daily Telegraph.

The show, based on the novels by Winston Graham, proved to be a major hit for the BBC earlier this year (15).

It is a reboot of the original 1970s series which starred Robin Ellis in the title role of Ross Poldark.

Robin made a cameo appearance in the first season of the revived show, and Aiden said of the magical moment, "We had this scene together when we'd just started filming - a scene where Robin is a judge at a trial. After we'd filmed the scene, Robin turned to me and gave me a wink and a thumbs up. I knew it was the old Poldark judging the new. It made me feel a lot better."

Reports suggest the second season will air early next year (16).