Agatha Christie at her finest.

'Poldark' star Aidan Turner plays Philip Lombard in the upcoming 3-part BBC mini-series 'And Then There Were None', of which the first episode is set to air on Boxing Day. It's a gritty murder mystery with an impressive cast, rounding off a day of comfort and joy with tension and thrills. 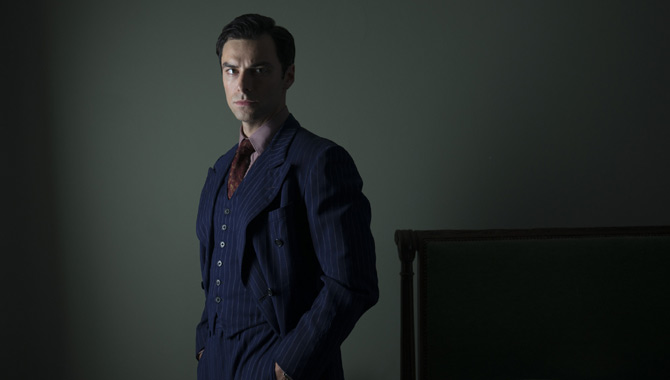 Aidan Turner stars in 'And Then There Were None'

Based on the 1939 novel of the same name by Agatha Christie, the series follows a group of ten people - none of whom know each other - who get invited to a mysterious island anonymously, but find themselves under attack from a vicious murderer who plans to kill them all of one by one. It's not clear who the killer is, and all they know for sure is that they can't trust anyone.

'And Then There Were None' has been adapted to television by Sarah Phelps and, alongside Aidan Turner from this year's historic drama series 'Poldark', stars Douglas Booth ('Noah', 'Jupiter Ascending'), Charles Dance ('The Imitation Game', 'Game of Thrones') and Miranda Richardson ('Harry Potter', 'Made in Dagenham'). Phelps also wrote the mini-series adaptation of JK Rowling's novel 'The Casual Vacancy' earlier this year, and she is joined by Craig Viveiros who is at the helm as director.

It's come a little under fire for its apparent inclusion of drugs, brutality and bad language, but Phelps insists she stayed faithful to the original story. 'People going, 'Oh, they didn't have that then' - yes they did! Up until 1917 you could go to Boots and say I've got toothache and they would sell you a phial of crystal cocaine', she said on Radio 4's Front Row. 'The whole idea that these things didn't exist until the fast and loose and permissive 1960s is absolute rubbish.'

It's a great new opportunity for Aidan Turner too, who wrapped the first season of 'Poldark' in April; a series in which he plays the ill-fated war veteran Captain Ross Poldark, who comes home to a life ruined by the loss of his father, the deterioration of his love life and the threat that hangs over his job prospects. Turner also started filming for season two in September. He landed the 'Poldark' role after appearing in 'The Hobbit' trilogy and 'The Mortal Instruments: City of Bones', and he'd also had a stretch in the BBC series 'Being Human'.

'And Then There Were None' starts at 9pm on Boxing Day on BBC One.