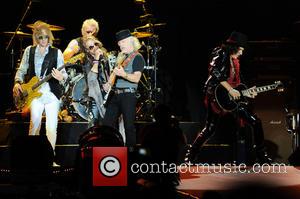 Aerosmith star Joe Perry had to persuade Slash to give up his beloved 1959 Les Paul guitar after realising it was the same instrument he sold to buy Christmas presents in 1980.

The rocker quit the band and found himself strapped for cash, so he offered up his best axe.

Perry says, "That was the best guitar to sell; I could get rid of it pretty quick because they are very rare... I sold it and really didn't think much of it... I just called up one of my dealer friends."

The band reunited and when Perry started tasting success again, he embarked on a quest to find the classic guitar he'd sold.

He adds, "I had all my guitar techs out looking everywhere and (bandmate) Brad (Whitford) walks in and says, 'I know where your guitar is', and he opens up the guitar magazine and the centrefold had Slash's guitar collection and right in the middle was that guitar... It ended up in his hands and he made no bones about the fact that he has been a fan of the band.

"A series of months go by... and then finally he stopped taking my calls, so I finally had to sit him down... I knew it was getting in the way of our friendship, so I said, 'Look, I'll never ask you about it again, man. If you ever wanna sell it back, just give me a call'.

"At my 50th birthday, Cheap Trick were playing... and I sat in with them and in the middle of the set my guitar tech walks up and hands me this guitar... Slash gave it to me."