The Boston-based rock icons will be playing an 18-date residency at Vegas' Park Theater from April 6th 2019.

American rock icons Aerosmith have announced details of their first ever Las Vegas residency, an 18-gig series scheduled for 2019 called Deuces Are Wild at the city’s Park Theater.

Deuces Are Wild will begin on April 6th and end on July 9th, and promises “never-seen-before visuals and audio from Aerosmith recording sessions.” Aerosmith will be working with producer Giles Martin – the son of legendary Beatles producer George Martin, and the chief sound technician of The Beatles ‘LOVE’ by Cirque du Soleil – to bring a stage show to life.

“We decided to do Vegas. Viva La Aerosmith,” Steven Tyler said on Wednesday’s edition of the ‘Today Show’, where the band officially unveiled their Vegas residency. 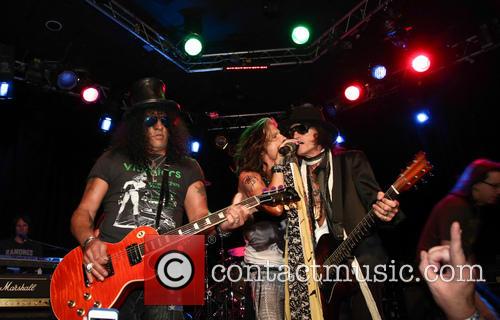 Aerosmith will be undertaking their first Vegas residency in April 2019

Tyler’s long-standing creative partner Joe Perry added, “We wanted to bring in there that we really can’t do on the road on a regular tour. So we want to bring a show that still has Aerosmith and all the guts of Aerosmith but has a whole other element to it.”

Forming in 1970 and recording 15 studio albums together, and ranking as the joint 13th highest-selling artist in American history, Aerosmith’s illustrious career is about to go into its sixth decade.

Tickets for the Deuces Are Wild run will be offered exclusively to members of the band’s Aero Force One fan club first beginning August 16th, with sales to the general public starting on August 24th.