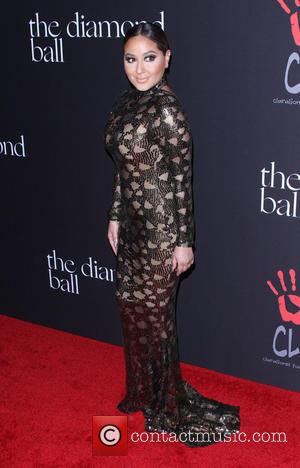 Picture: Adrienne Bailon - Shots from the red carpet as a variety of stars arrived for pop star Rihanna's inaugural Annual Diamond Ball which was held...

Singer Adrienne Bailon was blindsided when her break-up with Kim Kardashian's brother Rob became the main topic of conversation on an episode of the family's reality show, because the former couple had made a pact not to discuss the split in public.

The former 3Lw and Cheetah Girls star ended her two-year romance with Rob Kardashian in 2009, but it wasn't until some time later that he admitted his cheating led to the split.

The confession was featured on an episode of Keeping Up With the Kardashians, and Bailon reveals she was just as stunned as the rest of the world when she heard her personal business aired out on Tv.

Revisiting the incident on her U.S. talk show The Real, she explains, "There are two sides of every story. I've got an ex that cheated on me and when we broke up, his family asked - we all decided - we made an agreement that we would not speak about it publicly. And I was cool about that because I think being cheated on is embarrassing...

"When I watched it on Tv with the world, I was like, 'Wait, what happened...? I thought we weren't talking about it, but I guess you were saving it for an episode and I didn't know!'"

She continues, "Once their side (of the story) was told, then I felt like, 'Ok, now my side should be told as well...'"

Bailon upset members of the Kardashian clan last year (14), when she admitted she had regrets about her time with Rob and was sick of his fans blaming her for their break-up, but the 31 year old insists she has nothing but love for the famous family.

She adds, "I don't mean any harm to them. I've always said, they're good people, they're nice people. We just went through a situation and I felt it was important to say I was not this evil person that I was depicted to be... I was hurt."