Singer/actress Adrienne Bailon Has Dismissed Rumours Of A Reconciliation With Kim Kardashian's Brother Rob After Recently Calling Off Her Engagement. 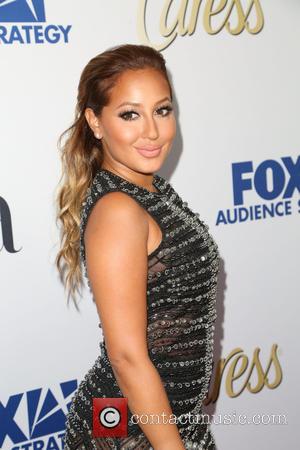 The former The Cheetah Girls star announced last month (Sep15) that she had parted ways with her fiance, Roc Nation music executive Lenny Santiago, and speculation subsequently emerged suggesting she had reconnected with Kardashian, who she dated for two years until their split in 2009. But the 31 year old insists there is no truth to the claim.

"I think he's a great guy and I always wish him well, but the rumours are going to go crazy," she says. "It is what it is."

In fact, Adrienne reveals she is in no rush to find love again, stating, "I am taking time for myself."

She recently confessed to embarking on a summer getaway to Europe to get over the heartbreak and she admits her adventures are far from over.

"I kind of called it my Eat, Pray, Love journey," she explains. "I went to Paris to study fashion, photography, and French language. I just kind of had a self discovery thing, and I'm still on that journey. I'm having a good time."

However, she knows the kind of guy she would eventually like to settle down with.

Adrienne previously opened up about her failed romance with Rob, insisting she was stunned when he broke their silence pact and admitted to cheating on the singer.

The confession featured on an episode of reality show Keeping Up With the Kardashians, and Adrienne admitted she felt the need to share her side of the story in her own interview after the programme aired.

"To this day, people will still say, 'You ruined Rob's life,' and I'll think, 'Damn, I was still playing with Barbie dolls when I met him'," she told America's Latina magazine. "It's common knowledge that he cheated on me. It always bothered me that people were like, 'Pero (but), why couldn't you forgive him?' Why are women always the ones who have to forgive? If you cheated on a man, he would be like, 'You're disgusting, and I want nothing to do with you'. But women, we're supposed to be like, 'He messed up. He made a mistake'.

"In my situation, it wasn't like, 'Oh my God! I made a mistake!' He strategically planned things out so that he could cheat on me, and that to me was so disloyal."