Adele is hoping to enlist urban street artist Pegasus to create an 'iconic' painting of her, after seeing a piece of art that the star painted for her pal Alan Carr. 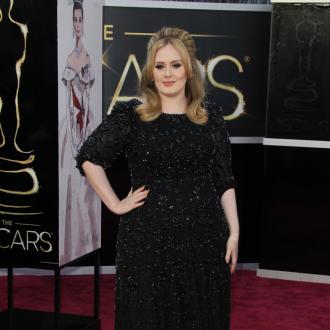 Adele has commissioned an 'iconic' portrait of herself.

The 26-year-old singer has approached urban street artist Pegasus to create the image, after seeing a painting which he did for her pal, comedian Alan Carr.

A source revealed: ''Adele has been in touch saying that she wants Pegasus to paint her.

''She wants the painting to be iconic. Pegasus painted her friend Alan Carr and as soon as she saw his hilarious picture she wanted one of her own.''

The 'Skyfall' singer is rumoured to be preparing for the release of her third studio album next year, following the worldwide success of her previous record '21', and is hoping the painter will also include the cover art of some of the albums that inspired her in the portrait.

The insider continued: ''She's also asked for album artwork to be in the painting, as well as cars and some of her other favourite things.

Adele - who has two-year-old son Angelo with her partner Simon Konecki - is hoping the art will brighten up her abode, and is keen for the emerging artist to create the work for her as she thinks he will soon become famous.

Talking to the Daily Star newspaper, the source continued: ''She loves art, and her home is covered in loads of artwork.

''She particularly likes to display the work of lesser-known British artists in her home.

''Adele's extremely excited about Pegasus and is certain that he'll be the next big thing.''