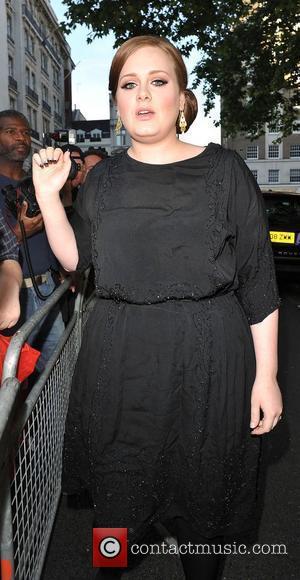 Sultry British pop star Adele has spoken out about her reasons for scrapping dates on her 2008 U.S. tour - it was all over a boy!
The Grammy Award-winning Chasing Pavements singer headed home as a result of "family issues" but later fuelled gossip her decision to scrap shows was related to her alcohol intake - by telling a U.K. tabloid, "I was really unhappy at home and there was a lot of family issues going on... But I got better again - I stopped drinking."
At the time, Adele refused to speculate on how her drinking was related to her "family issues," but now she reveals she quit the U.S. tour to be with her boyfriend, a heavy drinker like her.
She tells Nylon magazine, "We refer to that period as my E.L.C., my Early Life Crisis. Now I'm sober, I'm like, 'I can't believe I did that.' It seems so ungrateful.
"I was drinking far too much and that was kind of the basis of my relationship with this boy. I couldn't bear to be without him, so I was like, 'Well, OK, I'll just cancel my stuff then.'"
Adele insists the boyfriend is no more, but he provided her with plenty of songwriting material: "I got a second album out of it (relationship), so it was fine."