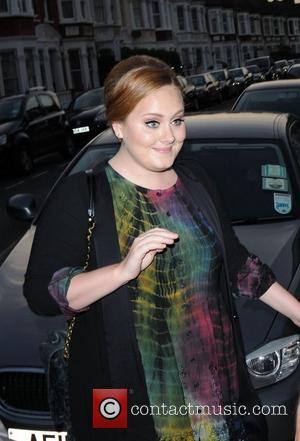 The nominations for the 2011 Mercury Music Prize have been announced, with British songstress Adele and former winners Elbow among the contenders. The shortlist, chosen from over 240 albums, was announced by Lauren Laverne during a ceremony in London on Tuesday (19th July 2011).
Adele's second studio album '21', which has achieved monumental success both in the UK and US, is already installed as the strong favourite to take the award. Elsewhere, Elbow's 'Build a Rocket Boys!' is fancied to build on the Manchester outfit's success at the 2008 awards, and Tinie Tempah's 'Disc-Overy' is also among the leading contenders. PJ Harvey's acclaimed 'Let England Shake', Metronomy's 'The English Riviera' and Anna Calvi's self-titled debut album have also received nods. Simon Frith, Chair of Judges for the award, said, "This year's Barclaycard Mercury Prize shortlist highlights the remarkable possibilities of what can be achieved with music - the grand gesture and telling detail, albums that are dramatic, ambitious and artful, emotional and affectionate, funny and profound". Despite the list's obvious frontrunners, the prize has a habit of rewarding the underdog, and British electronic composer James Blake's self-titled record will no doubt be fancied at odds of 8/1. Rupert Adams of William Hill described this year's contest as "closest ever", saying, "This quality is reflected in the closeness of the odds we've given to the 2011 Barclaycard Mercury Prize 'Albums of the Year' - every album here could be a winner".
Adele - 21
Anna Calvi - Anna Calvi
Elbow - Build a Rocket Boys!
Everything Everything - Man Alive
Ghostpoet - Peanut Butter Blues & Melancholy Jam
Gwilym Simcock - Good Days at Schloss Elmau
James Blake - James Blake
Katy B - On a Mission
King Creosote & Jon Hopkins - Diamond Mine
Metronomy - The English Riviera
PJ Harvey - Let England Shake
Tinie Tempah - Disc-Overy