Review of 21 Album by Adele

Since breaking onto the music scene four years ago, Adele has had a stellar of a career. However, it was after that Brits performance that cemented her as one of the great artists of our generation. Adele has been the first living artist to achieve the feat of two top five hits in both the Official Singles Chart and the Official Albums Chart simultaneously since The Beatles in 1964; and these statistics are only mere figures when one only has to listen to Adele's abilities as both singer and songwriter. After a small break, Adele now returns with 21; which as the title suggests, highlights a real maturity and growth from its predecessor. 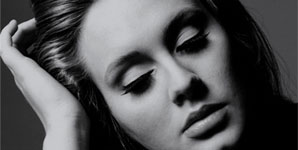 The album kicks off with its leading single, Rolling in the Deep; a haunting blues track that is a great start to the record. On the album Adele seems to be going back to her soul roots, but yet also aligning it with a further established sound. Don't You Remember, is an epic slow builder that ends with a tearful and stunning climax, I'll Be Waiting, might not have been out of place on Duffy's debut album Rockferry but with Adele performing it, the song reveals Adele's true flexibility as a vocalist.

Ms Adkins sure knows how to write truly brilliant music. Rumour Has It exemplifies this, from its thumping drums at the start, all the way to the middle-8 that breaks down into a deliciously hollow elegy. Sounding like it would appear on a James Bond soundtrack, Adele really highlights her vocals here and proving that she does more than create captivating music; she fills it with sensitive feeling and compassion. However, in contrast to these epic offerings, Adele balances out the record with beautifully melancholic tracks such as Turning Tables, and the obviously successful Someone like You. Whilst the latter has received commercial and critical acclaim, it is actually the former which is truly stunning and probably the best track off the record. With Adele's vocals and the accompanying piano complementing one another perfectly, this is a ballad that will try it's hardest to raise hairs all over your body.

However, the album is not completely perfect. There are certain tracks that, whilst brilliantly produced, seem a bit tame. He Won't Go whiffs of filler and sounds like it would be used in the background of a, albeit sophisticated, hotel lobby. Similarly One and Only is a track that whilst showing the emotion and feeling that Adele has incorporated, it also oxymoronically feels quite vacant and empty. When Adele shines, she excels, but when she sounds generic, it comes across as bit of a shame.

Altogether, this album must be commended. Expectations were always going to be high after Adele's debut offering, and it is good to say that this time round, she certainly does not disappoint. Still producing charismatic, hypnotising and enticing music, even if it is through her captivating vocals, it is obvious that Adele is going nowhere. Let's just hope she doesn't wait around again too long next time. Prepare to believe the hype.