By Rich Cline
Good
A remake of the 2010 Uruguayan thriller, this is reportedly based on a true story. Shot as if it was filmed in a single continuous take, this claustrophobic horror film sends chills down our spines. But instead of deepening the story, the growing creepiness becomes an exercise in superficial horror: it's scary, but it's hard to care. Sarah (Olsen) is working with her father John (Trese) and her uncle Peter (Stevens) to clean out a family-owned lake house that's been trashed by squatters. Sarah is clearly unnerved by the blacked-out windows, requiring the use of lanterns inside even during the daytime. Then she starts hearing loud noises upstairs. And when Peter is out getting supplies and her father is in the basement, she sees someone stalking her in the shadows. Soon she's running for her life. But even when she gets outside, she simply can't escape the house.

As a girl, Sarah Murphy would spend her summers at a beautiful lake house with her dad. Many years later, the pair - along with Sarah's uncle Peter - returns to the house to renovate it, as the family wish to sell it. Sarah's old friend, Sophia, stops by but the former doesn't recognise her. The awkward conversation eventually comes to a close and Sarah continues into the house to begin renovations.

One of the more gratifying feelings a movie critic can have is the feeling of going into a picture expecting tiresome clichés of an overplayed genre, only to discover delightfully surprising freshness and soul where all the hackneyed conventions usually are.

"40 Days and 40 Nights" is such a movie. Misleadingly marketed as just another misogynistic romp through the young male libido, this often ribald comedy about a frustrated 20-something giving up sex for Lent is what the puerile, simplistic "American Pie," "Tomcats" and "Saving Silverman" might have been, had they been made by people with imagination and wit.

Directed by Michael Lehmann -- the man behind the twisted teen angst and irony of the subversive '80s cult hit "Heathers" -- "40 Days" finds many new and inventive ways to make sexual frustration funny.

A remake of the 2010 Uruguayan thriller, this is reportedly based on a true story.... 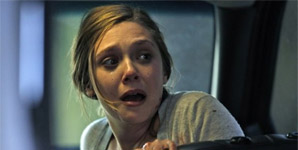 As a girl, Sarah Murphy would spend her summers at a beautiful lake house...