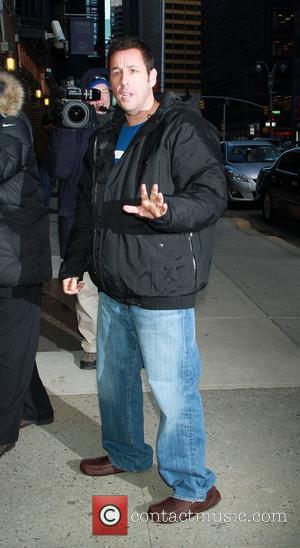 Adam Sandler says he hired a transgendered housekeeper named 'Clemente' in order to provide a "contrast" to the other women present in his house.
ADAM SANDLER told David Letterman how he hired a transgendered housekeeper to provide a contrast to the other women in his family, which include his wife, two daughters, grandmothers and a female dog.During an appearance on the chat show yesterday, Sandler joked, "My wife let me get a transgender housekeeper. Just to be cool for me to have just one other penis in the house. His name is Clemente and he's very nice". The star was on the show to promote his new movie 'Just Go With It', which hits cinemas today (11th February 2011). The comedy movie also stars Jennifer Aniston and follows the story of a plastic surgeon who enlists the help of his office manager to find him the woman of his dreams. Sandler, whose movies are said to have grossed over $3 billion worldwide, received a star on the Hollywood Walk of Fame last month. Speaking after the ceremony to OnTheRedCarpet.com, the comedy actor quipped, "I looked at some of the other stars and I think mine shines a little brighter than most. I hate saying that out loud. My name looks beautiful. The star is beautiful itself. I like the amount of marble. And I think it's a well-deserved honor for such a sweet, sweet man"
Sandler is currently filming the comedy movie 'Jack and Jill' about a family man forced to deal with his twin sister moving to Los Angeles from New York. The film also stars Al Pacino and is set for release in December 2011.