Pharrell Williams Wins The Voice For The First Time

R&b Star Pharrell Williams Is Celebrating His Very First Victory As A Mentor On U.s. Talent Show The Voice After His Top Contestant Was Named The Winner On Tuesday's (19may15) Finale. 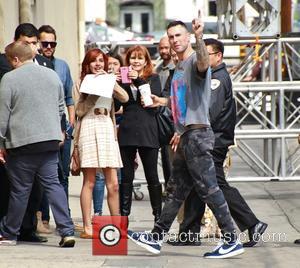 After two seasons as a coach, the Happy hitmaker was finally victorious as his protegee Sawyer Fredericks won the coveted recording contract and the $100,000 (£62,500) cash prize. His first single, Please, was written specifically for him by Ray LaMontagne.

Fredericks, who at 16 is the show's youngest ever winner, beat out the three other finalists, and the feat also marks the first time Williams has ever had a member of his team reach the finals.

The finale was a star-studded event featuring performances from Levine's band Maroon 5, Ed Sheeran, Luke Bryan, Sheryl Crow, Kelly Clarkson, John Fogerty and Meghan Trainor, as well as a special set from coaches Shelton, Adam Levine, Williams, and Christina Aguilera, who teamed up to sing B.B. King's The Thrill is Gone in honour of the music icon who passed away last week (14May15).