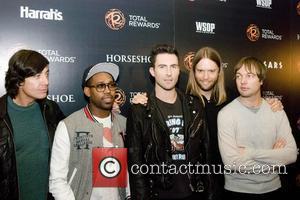 Singer Adam Levine is set to become the latest pop star to launch his own fragrance.
The Maroon 5 frontman's first scent, 222 by Adam Levine, is scheduled to hit department stores in May next year (13).
A spokesman for ID Perfumes, who have partnered with Levine for the project, says, "Adam is a performer with tremendous charisma, both on stage and on TV. Endeavouring to capture that in a bottle has thus far been very exciting and we're certain the final products will be even more so."
Britney Spears, Selena Gomez, Black Eyed Peas star Fergie and Justin Bieber are among the chart stars who have also sampled the sweet smell of success and launched their own fragrances.