By Lauren Mullineaux on 04 December 2012

Adam Green is undoubtedly most recognisable as one half of The Moldy Peaches, but it's his solo career that's been the most interesting to watch as he's taken himself from jumper wearing anti-folk king and given us record after record of wildly different yet always compelling tunes.  His latest sees him join forces with singer and multi-instrumentalist Binki Shapiro, the female third of Indie darlings Little Joy. In keeping with this transformation, together they offer us a record of pristinely coiffed 60s throwbacks. 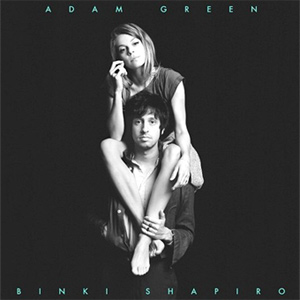 Injected with Green's traditionally bleak humour and Shapiro's sultry vocals, their debut duet is at once endearingly sentimental and charmingly knackered in that sentiment. The his and hers thing has been done to death so much that there's now a twee as f*** couple using the moniker to release crass Christmas singles upon us, but here as the pair trade witticisms and digs it breathes fresh life into a tired trope: "I can't be the first to say you're the worst, surely there's one or two? // I care more if you act as though you like me than if you really do." The fact that all these songs are quick little ditties makes them all the more appealing and is proof that you don't need three sing along choruses to show people a good time. It's amazing what this pair can do in such a short space of time; 'What's The Reward' is under three minutes and slams through more styles than you can dare to name, clearly making haste of Shapiro's skills.

This instrumental nature runs throughout the ten tracks here and while it can come across as bizarre, when they get it right 'Nighttime Stopped Bleeding' they create a sound that's bigger and braver than the majority of artists will dare to try. The aforementioned track is a terrifying lover's lament where the music bubbles up into swells of nightmarish howling then, just like that and with a quick sigh, it's over. With a running time of under 30 minutes, you won't get bored of playing this time after time because it always leaves you wanting more which, far from feeling short changed, is one of its finest qualities.

'Here I Am' the first track released from the record is easy single material with its lustfully layered chorus that sees the pair sing over one another in husky hushed tones and a clean folk melody that's sweeter than a baby that doesn't cry. The first half of the album carries on perfectly from this position with track after track of seemingly upbeat polished pop that's designed to go with a smoky bar and an Old Fashioned as much as it is a sunny day. Glossy goes with the style this is aiming for and it runs through every facet of this record down to the note perfect nature of both Green and Shapiro's vocal harmonies. While Green's low drawl has an automatic air of negativity and cynicism about it, it's Binki Shapiro who's the real discovery here getting more chance to show off than she has previously. 'Casanova' is her vehicle and her pitch perfect pipes cut across the deadpan lyrics, "Casanova to the mentally ill, I don't know why comes as no surprise," with old school charm. Her voice is the ultra-sexy and desirable female counterpart to Adam Green's sturdy masculinity.

Like everything the pair have done individually, together they have made a record that's short, sweet, and maturely macabre; a late contender for an album of the year.