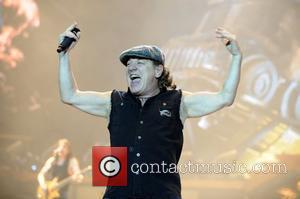 AC DC frontman BRIAN JOHNSON has opened up about the cancer scare that forced him to cancel dates on the band's 2009 tour.
The 62 year old suffered damage to his oesophagus during the band's Black Ice tour and he admits he feared he wouldn't be able to rock again.
The Highway to Hell hitmakers cancelled a string of dates in September (09) after he was diagnosed with Barrett's Syndrome.
He tells New Zealand rock radio station Voxy, "It leads to cancer of the oesophagus, then they have to take the voice box out, which stopped me right in my tracks."
Thanking doctors for detecting the abnormality early enough, he adds: "I was very lucky we caught it in time. A lot of people think it's heartburn but I knew there was something really hurting me so I went straight to the top doctor.
"I was the most scared I've ever been in my life. I didn't sleep for a week."