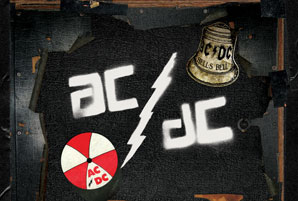 This is a one off chance for any serious AC/DC fan. Sony/BMG are releasing AC/DC's Backtracks Collector's Box Set. The product is Not Available In Stores! and there's only Limited Quantities!

We think this is the must-have premium box-set that delivers the ultimate AC/DC experience.

Memorabilia from the Band's earliest days of touring

ALL OF THIS COMES IN A WORKING AMP!

The 12"x12"x4" (30cm*30cm*10cm) exterior box is designed to resemble a vintage AC/DC guitar amp - complete with the original logo that was spray-painted onto the rear of Angus and Malcolm's speaker cabinets in 1975. The "head" of the amp has a handle that lifts the top off to reveal the contents housed within. Oh yeah, the head is also a WORKING GUITAR AMPLIFIER! That's right, one watt of pure AC/DC makes this box a truly unique collector's item. You can PLAY the box set while LISTENING TO the box set!

Check out the videos of Angus using the amp.

This CD, for the first time, collects AC/DC's studio rarities, many on CD for the first time. These are all of the songs that the band recorded throughout their career that appeared on Australian-only LP releases, movie soundtracks, 7" and 12" single releases, and CD "tour editions", etc. 12 of the 18 tracks are completely unique songs that have all been remastered to match the unparalleled sound quality of the rest of the Columbia AC/DC catalog reissues. The other 6 tracks are the original versions of classic AC/DC songs previously only available on the original Australian albums. Some restore seconds to the original fades, others restore guitar solos and choruses. All are highly sought-after collectibles and have never sounded this good!

Like CD 1, this is a collection of the band's live rarities from singles, CD pros, compilations and other oddities. All have been remastered from original sources for optimum sound quality.

Big Gun" the theme song to the motion picture "Last Action Hero" - itself a rarity on CD 1 - the first time on any AC/DC album! You also get all three music videos from the Ballbreaker album, three from Stiff Upper Lip and the most recent clips for "Rock N Roll Train" and "Anything Goes" from the #1 album Black Ice.

But there's more! Several clips from the original Family Jewels set actually had more than one promotional clip. Here are the alternate versions of those classic videos - all on DVD for the first time.

2003 was a banner year for AC/DC. From their induction into the Rock AND Roll Hall Of Fame to massive European dates with the Rolling Stones, the band made several high-profile public appearances (including the SARS concert in Toronto for 200,000!).

One run of shows found the band returning to their roots - playing clubs and theaters where they thrilled fans with sweaty, stripped-down shows and even throwing in some rarities they hadn't played in years. This show from Munich, Germany is the epitome of an "inside" look at how powerful the AC/DC show is - without all the bells and whistles of the big arena and stadium shows (well, they did bring the cannons.).

164 pages of rare and unseen photos spanning 1974-2009 plus full-size re-prints of original press releases, tour itineraries, tour books, test pressing labels, advertisements and much more. A real history of the band from the inside out. Rare photography includes never-before-seen shots of the band recording at the Albert Music studio on King Street in Sydney with legendary producers Harry Vanda and George Young in 1977. Also tons of unpublished live shots from all over the world.

Check out some classic AC/DC Videos to get you in the mood!

AC/DC - You Shook Me Video