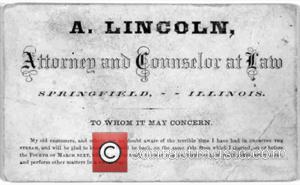 Picture: Abraham Lincoln - The collection of calling cards is a fascinating insights into the design, layout and signatures of choice of people who, on the...

Not content with guiding the United States through a civil war in the 1800s, it seems that Abraham Lincoln is back with a vengeance and wants Buffy's vampire-slaying crown. Entertainment Weekly have published stills from one of 2012's more bizarre film concepts. Scheduled for release in June, Abraham Lincoln, Vampire Hunter is based on the novel from Seth Grahame-Smith who is enjoying a growing reputation for mixing up history with modern drama (his novel Pride, Prejudice and Zombies has become something of a cult hit with zombie fans).

Anyone doubting the premise of the movie may be reassured that it is produced by Tim Burton and stars Benjamin Walker and Rufus Sewell. Walker explains that the story is "told through the structure of Lincoln's actual life. You not only see these huge fight scenes and great moments of drama, but you get sort of the greatest hits of Lincoln's life.You get a portrait of this man, as well as a thriller." Entertainment Weekly suggests that the vampires in the movie exist in similar to that in which terrorists exist in the modern word; a permanent, hidden threat and Walker adds "This evil moves among us, and maybe lives next door. It's an ideology that we don't fully understand, but they live by it."

Benjamin Walker, who plays the role of Abe Lincoln, has previously starred in Flags of Our fathers and is scheduled to appear in a dramatization of John Milton's epic poem 'Paradise Lost' along with Bradley Cooper and DOMINIC PURCELL.