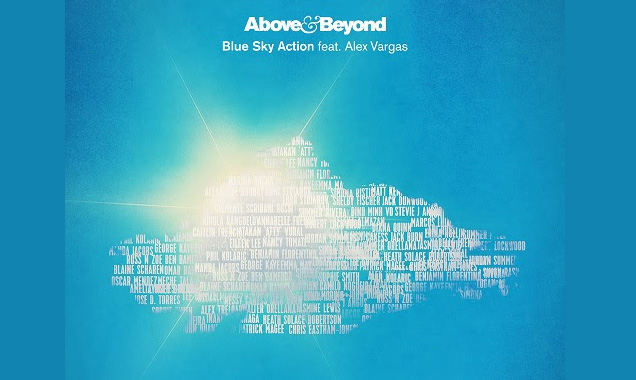 Above & Beyond, one of the world's most powerful songwriting and production trio in electronic music today, are about to explode with their new single "Blue Sky Action." It's set for release July 21 on Anjunabeats/Ultra Music.

Written by London, UK-based ABOVE & BEYOND-Jono Grant, Tony McGuinness and Paavo Siljamäki-with vocals from Alex Vargas,"Blue Sky Action" is a beautifully crafted big room anthem that marries instant hooks with a typically emotive lyric.  It also represents a taste of their forthcoming new album (title TBA), due in early 2015.

"'Blue Sky Action'  is part inspired by the first half hour of the film 'Wall-E,' which for me was one of the most moving, romantic films of its generation," says Tony McGuinness.  "'Wall-E' is the last man standing on an earth rendered uninhabitable by pollution and fierce sunlight. He owns every material thing imaginable, but something is missing; he's lonely. When the clouds part unexpectedly his perspective changes, and he decides to risk everything for adventure and love. And so begins his blue sky getaway."

ABOVE & BEYOND's main stage Kinetic Field performance at Electric Daisy Carnival last month was equal parts moving and visually mesmerizing. August Brown of the Los Angeles Times (6/23/14) reviewed the trio's live experience at EDC: "...Above & Beyond had perhaps the most purely tasteful major headline set of the weekend.over the years they've forged a sound that accomplishes all the legwork of big-field dance music but avoids most of its cliches.  The group is doubly relevant today, having founded the essential label Anjunabeats and its deep-house offshoot Anjunadeep. But their real power is still onstage, with a set full of ebbs and flows that felt both hypnotic and dramatic, with none of the jarring drops or dumb buildups of so many contemporaries.their set had the hope and melancholy of a dance-music devotional."

For those that didn't get to experience the set in Las Vegas, ABOVE & BEYOND will return to the U.S. this year for two marquee dates. OnFriday, August 1, the outfit will perform on Perry's Stage at Lollapalooza at Grant Park in Chicago. Later in the fall they'll return again for their sold out headlining show at the famed Madison Square Garden in New York City on Saturday, October 18, to be broadcast live, marking the 100th episode of their world renowned Group Therapy radio show.  ABOVE & BEYOND are the first British electronic act to headline the famed venue and the show sold out in less than 12 hours.