Oscar-winning screenwriter Aaron Sorkin has written an open letter to his ex-wife and teenage daughter in the wake of Donald Trump’s shock election victory this week, urging them to “fight injustice”.

In a letter addressed to “Sorkin Girls” and published by Vanity Fair, the 55 year old award-winning creator of ‘The West Wing’ reflects on what the divisive Republican president-elect will bring to the United States over the coming four years after his win over Hillary Clinton on Tuesday.

“Well the world changed late last night in a way I couldn’t protect us from,” Sorkin writes. “That’s a terrible feeling for a father. I won’t sugarcoat it – this is truly horrible. 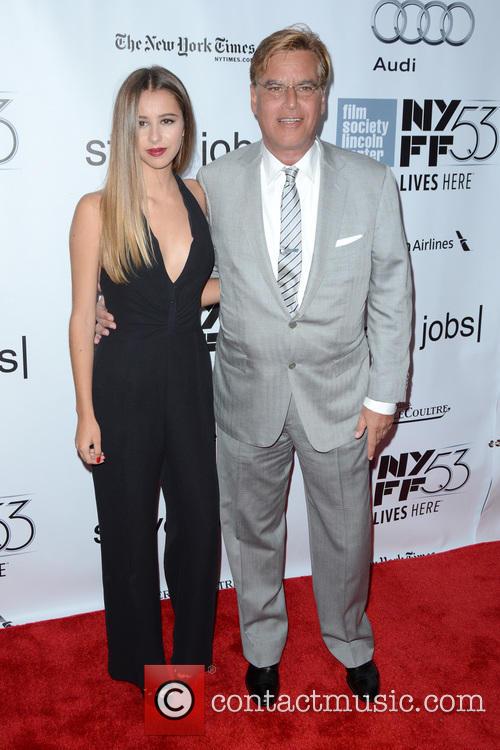 Aaron Sorkin with his daughter, Roxy, in 2015

“It’s hardly the first time my candidate didn’t win (in fact it’s the sixth time) but it is the first time that a thoroughly incompetent pig with dangerous ideas, a serious psychiatric disorder, no knowledge of the world and no curiosity to learn has.”

Sorkin bemoaned the result, blaming it not just on Trump but on “white nationalists, sexists, racists and buffoons. Angry young white men who think rap music and Cinco de Mayo are a threat to their way of life… men who have no right to call themselves that and who think women who aspire to more than looking hot are shrill, ugly and otherwise worthy of our scorn rather than our admiration.”

He also told his 15 year old daughter, Roxy, whom he shares with ex-wife Julia Bingham, not to give up hope and to remember that many others feel the same way about the result.

“The Trumpsters want to see people like us (Jewish, ‘coastal elites’, educated, socially progressive, Hollywood …) sobbing and wailing and talking about moving to Canada,” he continued. “I won’t give them that and neither will you. Here’s what we’ll do… We’ll f***ing fight. (Roxy, there’s a time for this kind of language and it’s now.) We’re not powerless and we’re not voiceless.

“We get involved. We do what we can to fight injustice anywhere we see it –whether it’s writing a cheque or rolling up our sleeves. Our family is fairly insulated from the effects of a Trump presidency so we fight for the families that aren’t. We fight for a woman to keep her right to choose. We fight for the first amendment and we fight mostly for equality – not for a guarantee of equal outcomes but for equal opportunities. We stand up.”

More: Trevor Noah provides commentary on election night – “I am very much afraid”