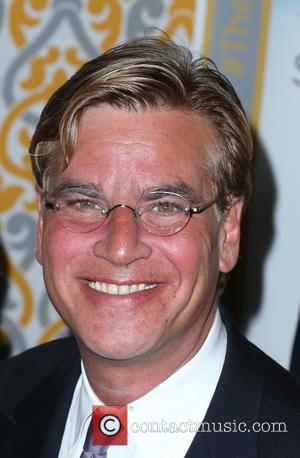 Picture: Aaron Sorkin - A variety of stars attended the third season premiere of the HBO TV series 'The Newsroom' at the DGA Theater at DGA...

Cook slammed the filmmakers behind the upcoming movie about the late Apple co-founder, branding Hollywood executives "opportunistic" for portraying Jobs in a supposedly unflattering manner.

After hearing his comments, the outspoken Oscar-winning writer fired back at Cook, saying, "Nobody did this movie to get rich... Secondly, Tim Cook should really see the movie before he decides what it is. Thirdly, if you've got a factory full of children in China assembling phones for 17 cents an hour, you've got a lot of nerve calling someone else opportunistic."

But now, Sorkin is backtracking on his comments, and tells E! News that both he and Cook are both at fault.

He says, "You know what, I think that Tim Cook and I probably both went a little too far. And I apologise to Tim Cook. I hope when he sees the movie, he enjoys it as much as I enjoy his products."

Jobs, who lost his battle with pancreatic cancer in 2011, is portrayed by Michael Fassbender in the new biopic.