Aaron Paul was a school 'geek'

Aaron Paul never had a girlfriend until he was 19 because he had a ''sheltered'' upbringing and was only interested in theatre and his studies. 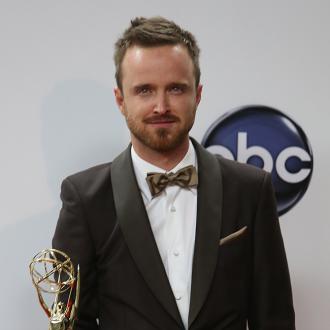 Aaron Paul never had a girlfriend until he was 19.

The 'Need for Speed' actor - who married Lauren Parsekian in May 2013 - admits he was a ''theatre geek'' at school who had a sheltered upbringing which meant he rarely went to parties or dated during his teenage years.

He said: ''It was a beautiful, loving home. I was very protected.

''They wanted to keep me out of harm's way, so I didn't grow up going to parties in high school. I never dated.

''My main focus was school and theatre. I was just a theatre geek.

''I had a girlfriend in fifth grade but, let's be honest, we only talked three times and we dated for a year and a half. My first proper girlfriend was when I was 19, after I moved to LA.''

Aaron was smitten with Lauren from the minute they got together at the Coachella festival in 2011, a year after they first met, and even told her that night he wanted to marry her some day.

He recalled to Britain's Marie Claire magazine: ''There was just this unspoken thing. We ran off and had our first kiss on the Ferris wheel.

''I told her that night how I felt. I said, 'I think I love you. Don't be terrified, but I truly believe that, one day, I'm going to ask you to marry me.''