Aaron Paul and his wife Lauren have applied to legally change their surnames to adopt the actor's professional moniker.

Aaron Paul and his family want to legally change their names.

The 'Westworld' actor's real surname is Sturtevant but he and his spouse Lauren have filed a petition to adopt his professional moniker as their new last name.

And that's not all because, according to documents obtained by TMZ, the couple have also made a request to change their six-month-old son's name from Casper Emerson Paul to Ryden Caspian Paul.

The pair - who are also parents to four-year-old daughter Story - explained they were required to give a name at the hospital when their son was born but later found a moniker they liked better and want to legally make the switch.

Aaron and Lauren want to change their surnames to conform to his professional identity and to keep the family name consistent.

Just weeks after the couple's son was born, the 43-year-old actor was already publicly refering to him as Ryden.

He told talk show host Jimmy Fallon: "A new baby boy. Yeah, his name is Ryden, and I love him."

The former 'Breaking Bad' star previously admitted he couldn't wait to have more kids, after fatherhood had changed his life.

He said: "It's easily the best chapter of my life. I think if I maybe was single, didn't have a job and was struggling and I turned 40, it would be a lot harder, but I feel I'm in a good place. I can't wait to have another baby, and I'm so excited to see what 40 has to offer. I'm just excited to be around, to be alive. I'm just happy to be here. Life is good.

"Fatherhood has definitely changed me. Having a child is the closest thing to magic that anyone can have. I see why people rush home to be there when they get home from school. You don't want to miss any of it." 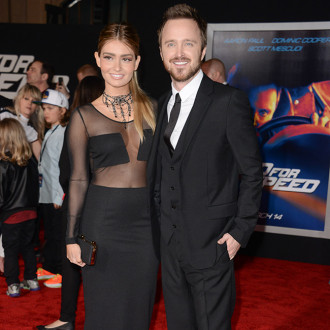