For the past five years, Seattle-based, seven-piece band Aaron English have been working to make their impact upon the music scene. Having already self-released two albums and toured the US three times, they are set to capture the attention of the public eye with their third outing American [fever] dream. As the title suggests, we experience various issues of domestic life tackled, ranging from politics to religion. The album itself, having been produced in a 150-year old warehouse, explores a true personal connection in all the tracks.

The album kicks off with Believe Me, a nice and slightly tragic track that you would expect to hear in the background of some Grey's Anatomy episode. Whilst the track exemplifies Aaron's great vocals and amazing piano playing skills, the lyrics, especially in the chorus, tend to come across quite uninspiring. Doves, the David Grey knock-off, also fails in this as how many times 'like a dove' is said surely must be a record-breaker. Both tracks however create a soothing effect and reveal that sometimes simplicity in a melody is best. However, this soon becomes a major problem in the LP. Being only 9 tracks is short enough but then to have nearly all of them be slow-paced, means that the album tends to drudge along. Well god bless you and your man is the only medium-paced song that stands out due to it being chirpy and uplifting. Sadly the rest of the songs, even though beautiful, can sometimes become tiresome; as seen in Anthem which only shows an anthemic feel in the lyrics rather than it's tune or pace; in turn actually sounding quite generically dull.

It is obvious why this album is titled the way it is. Aaron English attempts to tackle various issues. Whilst possibly referring to America's recent invasion in Iraq and Afghanistan, Peace is a strange song that refers to the Cold War, a period of time Aaron would have never even lived through. The song itself sounds like a hymn that would be sung amongst veterans and it is very successful in not only creating a feeling of commarade but by also making its political point clearly. Similarly, Pale Saint reveals English's religious views as he subtly whispers 'I start thinking that Noah's little flood wasn't so bad'. He is doing more than just creating mindless pop music.

As said previously, the lack of any uptempo songs (or even medium-paced ones!) certainly hinders this track. One cannot however fault, by far, the best track off the album. The final track The Name of this song is a secret is a beautiful, despondent and nostalgic song that uses the idea of music as an analogy for love. There is a certain realisation here of the power music can have. Stripped to a voice and a piano, this is easily Aaron English at their best. He claims in the song that 'there's too much talk, listen to wat you're missin'. By advising us to 'listen' to what really matters in life, this is a track that probably redeems the fact that the slow-paced tracks tend to bog down the LP. On a side note however, it is a shame to say that the outro comes across pointless as it completely ruins the beauty of the song.

Aaron English certainly do have an agenda. They are not up for just making simple music. Imbedding themes and spreading messages through their music make them definitely a band worth looking out for. With some truly beautiful songs combined with some really dull tracks; they culminate to make a reasonable LP. It definitely is not perfect but at the same time should not be too harshly criticised. And anyways, it seems like Aaron English are finally starting to live that American dream. 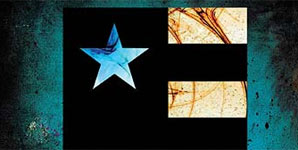