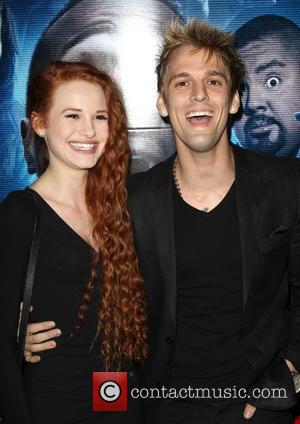 Pop star Aaron Carter has opened up about his past trouble with drug addiction and bankruptcy, revealing his problems started when he participated in U.S. reality competition series Dancing with the Stars.

The 26 year old joined the ballroom dancing show in 2009, and even finished in an impressive fifth place, but behind the scenes, his excessive stage fright led to an unhealthy addiction to anti-anxiety drug Xanax.

In an interview with Entertainment Tonight, Carter explained, "When I was on Dancing with the Stars, I developed an addiction to Xanax because of stage fright, which I developed during the show."

Carter revealed he was taking up to 14 milligrams of the prescription drug a day, which is three times more than the average dose.

In 2011, his mum and older brother, Backstreet Boys' Nick Carter, forced the singer to face his problems and seek treatment before his addiction became worse.

He said, "I never had a point where I realised I should stop. My mother stepped in. She and my brother teamed up and got me to the (rehab facility) Betty Ford Center"

Unfortunately, Carter's sister, Leslie Carter was also addicted to the same drug, but didn't receive the help in time to save her life. She died in 2012 at the age of 25, long after her brother completed his own rehab stint.

He divulged, "Leslie was heavy into it as well. But an opportunity happened where I could save my life. Leslie was never presented with that opportunity. I had a second chance to live and she died of an overdose in my father's bed."

And while Carter was still on Dancing with the Stars, he was also hit with financial and legal problems, finding out he owed millions of dollars, which included unpaid taxes.

He explained, "It stems from the years when I was 13, 14, 15 and then when I turned 18, I got hit with $2.2 million (£1.4 million) of stuff that I owed. People served me lawsuits while I was doing interviews on the dance floor. Right in front of my partner, in front of the interviewers, it was so embarrassing."

Since filing for bankruptcy last year (13), Carter has completed a series of debt classes, putting him one step closer to becoming debt free.