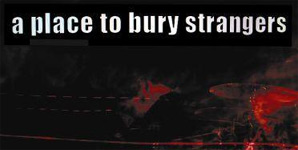 Having achieved the title 'loudest band in New York' before even reaching double figures as far as live shows are concerned, A Place To Bury Strangers aren't exactly novices in the art of gaining recognition. Which is a good thing in itself as anyone fortunate enough to have heard their astonishing debut album will testify to. Quite simply, what they do better than 99.9% of their contemporaries is combine a refreshing concoction of influences both past and present to create a future sound that is truly in a league of its own.

Forget those who may label them 'shoegaze revivalists' or whatever, as the only real comparison with that genre comes courtesy of singer/guitarist Oliver Ackermann's obsession with building and promptly using his own hand-made effects pedals. However, on first listen, 'To Fix The Gash In Your Head' is more Sisters Of Mercy than Slowdive, admittedly driven along by a similar delayed feedback urge as the Mary Chain's 'Psychocandy', but none the less interesting or vital for it.

Sister track 'Ocean' meanwhile is all swathing looped guitars over an insistent backdrop, pretty much like The Cure if they'd been kept in a padded cell for 5 years and then been asked to record the evidence with Ross Robinson on the controls.

Although this single is merely a taster for the album and their imminent live shows in the UK, only a fool would miss out on potentially the noisiest spasm of excitement you're likely to be overwhelmed by this year.