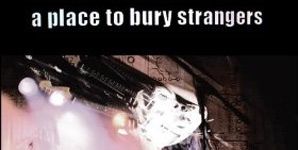 When this self-titled collection of demos was initially released as A Place To Bury Strangers first album in August of last year, much quivering, shaking limbs and mouths aghast ensued almost immediately. Not since the Jesus And Mary Chain shook the mid-1980s out of its coke and hairspray induced slumber had something so sonically bludgeoning, eardrum threatening and at times lyrically menacing barged its way out of the underground and into mainstream territories so incisively.

The New York three-piece - yes, that's right, such a crescendo of noise that sounds like the planet caving in is made by just three human beings - had spent their formative years between 2004 and 2006 honing their repertoire, no doubt enhanced by frontman/guitarist Oliver Ackermann's reputable Death By Audio effects pedal sideline that saw some of his handmade creations like the Interstellar Overdriver and Total Sonic Annihilation used and tested for the first time with his new musical cohorts after the dissolution of his last outfit, Skywave.

While their studio experiments were always going to be invigorating and occasionally ear shredding experiences, the live show has since proved to be something else entirely, bordering on the legendary. Indeed, its no coincidence that their appearance at this year's South By Southwest A&R festival caused a furore where labels and publishing companies were scrambling to sign them, not to mention numerous artists of high distinction such as Trent Reznor and Kevin Shields publicly expressing their desire to work with them.

So, as 2008 draws to a close, 'A Place To Bury Strangers' is finally ready for a full-on, official worldwide release. Despite being courted by the majors, APTBS have chosen Rocket Girl as the outlet for their wares; a wise move considering label head Vinita Joshi's previous track record for unashamedly promoting some of the shoegaze and noise scenes leading light regardless of what passing fad or trend was in vogue.

The ten tracks from the original recordings have since been re-mastered, while a further five new and unreleased compositions have been added making this a worthwhile purchase even if you were one of the lucky punters that managed to get your hands on the impossible-to-find initial pressing last summer.

Opener 'Missing You' is still the most spine-crushing, jaw dropping start to an album these ears have witnessed since 'Only Shallow' cascaded 'Loveless' into groundbreaking status, while 'I Know I'll See You' wrestles with The Cure's blueprint while The Reid Brothers play Russian Roulette in the background. 'Another Step Away' meanwhile adds layer upon layer of overwhelming bass guitar to an already deafening blend of fuzz that would scare the most ferocious thunderbolt out of the sky while 'Ocean', the six and a half minute epic of rolling guitar that seemingly built a wall of noise from nowhere to close the original album is simply immense. But most of you knew this already, right?

Of the extras, 'Never Going Down' breaks the intro from The Cure's 'Just Like Heaven' into shards of broken glass before eclipsing the whole song into a halo of white noise. 'Get On' almost has a 1982 Danceteria feel about it like what the Sisters Of Mercy would have sounded like way back when if they'd discovered Pro-Tools rather than dry ice and crushed black velvet. 'Half Awake' meanwhile could be renamed after Ackermann's most threatening pedal, such is the brute force of sonic destruction it carries from beginning to end, while the instrumental 'Run Around' and closing 'Sunbeam' - imagine Spitualized's 'Sway' played on a pneumatic drill - actually show a more composed side to A Place To Bury Strangers creative outlook.

If you don't already own this record in its previous guise then what are you waiting for? If you do then the five bonus tracks are worth the extra outlay alone. 'A Place To Bury Strangers' is a simply immense record that should initially be approached with caution from an otolaryngologist's perspective at least, but an habitual addiction from there on in.