Review of A Place To Bury Strangers live at Nottingham Bodega Social on Friday 6th of November. 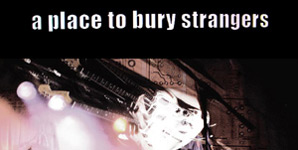 With the release of their second album 'Exploding Head' you might have half-expected A Place To Bury Strangers to quieten down a little, take the volume down from 'destructive' to merely 'deafening'. It's not that their sophomore offering sees them swapping walls of noise for twee sensibilities- its still a snarling monster of a record- it just puts a much greater emphasis on subtleties and layers; there is much more to pick out beyond the shriek of distortion.

No such luck. Like fellow brothers-in-amps Part Chimp their sonic assault has only grown in ferocity, bulging out grotesquely like a nuclear mushroom-cloud. It takes them a couple of songs to get into the swing of things, with sound problems ruining the electro-pop in a black-hole of their calling card 'To Fix The Gash In Your Head, but once they do, with strobe lights blazing at a near-infinite BPM, they are entrancing and more than a little terrifying.

Many will dismiss them as mere shoegaze revivalists, rehashers pushing a formula through further waves of effects, but there is so much more to the New York four-piece than that. Whereas My Bloody Valentine and the like hypnotised and, beyond their own 'holocaust', filed down their own maelstroms to an almost edgeless ambience A Place To Bury Strangers are nothing if not gritty and bare-knuckled. Strip away the sonics and you would be left with a white-eyed punk beast playing with the corpse of discarded drum machines and eyes-down hooks that wouldn't sound out of place in the hands of New Order or Depeche Mode.

Like any moments of anything pure there are downsides; the dull throb and searing earache of a white-noise hangover, not to mention the aching realisation that 99% of live sets are redundant by comparison, but the sheer thrill of being lost in their half-hour onslaught is more than worth the repercussions.