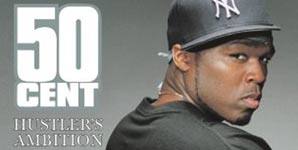 Curtis '50 Cent' Jackson makes his movie debut in Jim Sheridan's Get Rich Or Die Tryin', out now in the UK. Alongside acclaimed six-time Oscar nominee director Jim Sheridan – known for dark, intense biopics such as My Left Foot and In the Name of the Father - are a host of heavyweights…producers are Jimmy Iovine and Paul Rosenberg, Emmy-winning Terence Winter (Sopranos) provides the screenplay and legendary producer Quincy Jones (Michael Jackson, Frank Sinatra, Donna Summer, Count Basie) has come out of retirement to write the score. British actor Ashley Walters (Asher D of So Solid Crew fame) also has a role in the film which follows on from his critically acclaimed role in UK film Bullet Boy. Get Rich or Die Tryin' is loosely based on 50's experiences coming up from the streets and struggling to establish himself in a music career, but is as much a gritty portrayal of urban America as the story of his life.

The soundtrack – out now - is a straight-up 50 and G Unit album filled with all new tracks.

Hustler's Ambition is the second single from the album following Window Shopper and is typical of the soundtrack. Using old-school 70's soul samples coupled with 50's knack for writing the catchiest choruses in hip hop Hustler's is released 30 January. Elsewhere on the album, Dr Dre produces two tracks (Talk About Me and When It Rains It Pours) and all of G Unit appear – Mobb Deep, M.O.P., Young Buck, Lloyd Banks, Spider Loc, Olivia, Ma$e & Tony Yayo as well as Nate Dogg.

50's autobiography From Pieces To Weight and the computer game Bulletproof featuring 50 Cent are both available in stores now.