James Arthur wasn't the only celebrity out clubbing in London on Sunday (December 16, 2012), with 50 Cent and his massive entourage also partaking in some end-of-the-week drinking and dancing. The superstar rapper turned up at DSTRKT nightclub in Soho with a pretty heavy looking crew and an army of fans. Managers at the London nightspot were probably rubbing their hands together when Fiddy walked into the place, given his history with Soho clubs. Back in 2009, the hip hop star took bar tabs to a whole new level following the premiere of his movie Dead Man Running. Joined by 15 girls in a VIP booth at the Alto Club, the 33-year-old ran up a £75,000 bill. A guest at the party told the Daily Mail, "When he arrived at the club it was mayhem. The area was cleared for him and security ushered him straight through. On his table were bottles of champagne but he wanted a magnum bottle of Ace Of Spades champagne.You could tell that he was loving all the attention as people were trying to take pictures on their phones and were shouting his name." Things were a little different on Sunday, though 50 Cent still caused a stir at the club, with hundreds of girls pictured taking snaps with their smartphones. 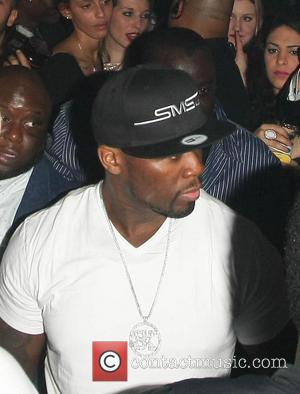 In other Fiddy news, the rapper is looking to expand his empire into boxing promotion. He recently became fully licensed and even got the backing of floyd mayweather Jr, who told BoxingScene.com, "I wish him nothing but the best." 50 Cent Looking Pretty Pleased With Himself in Soho