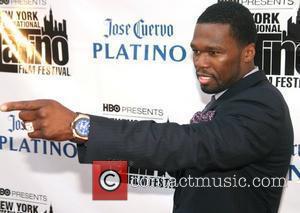 Rapper 50 Cent has defended his controversial post on Twitter.com which implied gay men should commit suicide, insisting the comment was misinterpreted.
The hip-hop star sparked outrage earlier this week (begs27Sep10) by writing, "If you (are) a man and your (sic) over 25 and you don't eat pu**y just kill yourself damn it. The world will be a better place."
Many of his followers criticised him for the remark - but the In Da Club hitmaker has explained the post and is adamant he wasn't making an "anti-gay statement".
In a post on the microblogging site, he writes, "The other night I made a joke about a b**w job. My male followers enjoyed it. So I then went on to joke about women receiving the same.
"Somehow they turned a simple joke about oral sex into an anti-gay statement. I have nothing against people who choose an alternative lifestyle, in fact I've publicly stated my mum loved women. It's funny how people think negative statements are newsworthy but positive statements are not worthy of coverage."