5 Seconds of Summer guitarist Michael Clifford thought he'd gone blind when he was burned by pyrotechnics on stage in London last month. 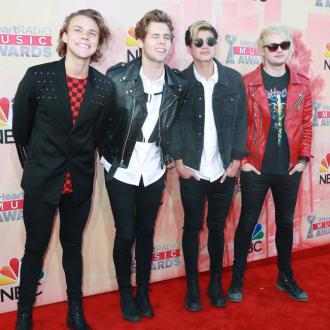 5 Seconds of Summer guitarist Michael Clifford thought he'd gone blind when he was burned by pyrotechnics.

The 19-year-old musician has admitted it was ''so scary'' when he was hit in the face with flames while performing at London's SSE Wembley Arena last month and at first thought he would never recover.

He said: ''It was so scary. I walked into an open flame. It was huge and Callum [Hood] got burned as well. At first I couldn't open my eye. I thought I'd lost my sight.''

The band - who premiered their new single 'She's Kinda Hot' earlier today (17.07.15) - returned to the stage the following evening after Michael had been treated for his injuries, which weren't as bad as first feared, but they have vowed never to have pyrotechnics on stage again.

He added: ''Getting back on the stage the next day was weird. I had this big, ugly bandage on my face. I didn't like that.

However, the four-piece group - also featuring Luke Hemmings and Ashton Irwin - are now focusing on their ''personal'' second record which they enjoyed making because they had some time away from their hectic touring schedule.

They told The Sun newspaper: ''This album is so personal. We're experiencing time to breathe. It was a time to reflect while we spent three months in a house in LA writing.''