5 Seconds of Summer star Michael Clifford came up with the band's name while he was in bed ''nude, eating chocolate, and watching Scrubs'' but insists it doesn't mean anything. 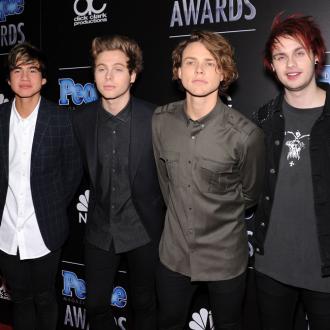 5 Seconds of Summer star Michael Clifford came up with the band's name while he was in bed ''nude, eating chocolate, and watching Scrubs''.

When asked how they came up with the name for the band, Michael said: ''We just... it doesn't mean anything. I wish it did, it's just a stupid name. I thought of it...''

However, drummer Ashton quickly corrected him, saying: ''He was nude in bed''

The band - made up of Michael, Ashton, singer Luke Hemmings and Callum Hood - recently took time out of their busy gigging schedule in Tokyo to visit Japan's world famous Cat Café in Japan, however, Ashton was unable to join the group due as he is allergy to the felines.

Speaking in Japan, Luke said: ''Ashton is allergic to cats. So it was me Callum and Michael. We went to the Cat Café. We were wearing pink slippers. They kind of stayed away from us in there. There were other people they were talking to.''

Purple-haired guitarist Michael joked: ''They kind of looked like me.''