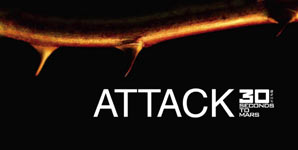 30 Seconds To Mars will release 'Attack' on 19th February; the first single to be taken from their hugely successful U.S. album, 'A Beautiful Lie'.

30 Seconds To Mars was formed by Jared Leto, who is famous for his roles in such films as Requiem For a Dream and Fight Club, and set to play John Lennon's murderer in next year's biopic of Mark Chapman; Chapter 27. The band comprises: Jared Leto, vocals and guitar; Shannon Leto, drums; Tomo Milicevic, guitars; and Matt Wachter, bass. Since forming in 2001 and releasing their debut album in 2002, they have gone from strength-to-strength as musicians, songwriters and live performers, with the new abum selling over 900,000 copies to date in the U.S. The success of this album was further acknowledged by MTV, who awarded the band MTV Best Video Award for the video to their 'The Kill' single.

'Attack' features vast, abrasive guitars and infectious vocals, which soar from a pain-stricken wail to an intimate whisper. It's an introduction to a lyrically direct and progressive album, which is lean and impacting, with focussed eclecticism which compliments the honesty of the songwriting. From start to finish, 'A Beautiful Lie' is a story riddled with pain, frustration, ambition, and ultimately purification. It's not a concept album per se, but it's certainly conceptual, unravelling like scenes from a spellbinding film about a man on the precipice of collapse who has to change in order to move forward.

Thirty Seconds To Mars - Do...

Thirty Seconds To Mars - Up...