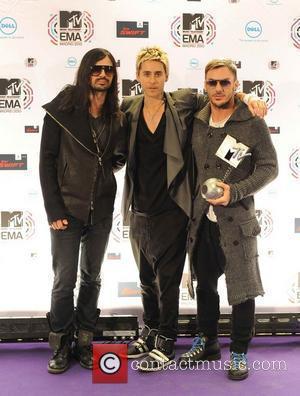 30 Seconds to Mars frontman Jared Leto had a rude awakening on tour when he returned to the band's bus to find a stranger asleep in his bunk.
The actor-turned-rocker was on the road with his group when they discovered their cardinal rule of sleeping in the same beds each night had been broken.
And they were even more baffled when they ordered the man out of their tour bus - and no one even knew who he was.
Leto tells Kerrang! magazine, "Everyone has their own bunk and that's the same every night - you don't swap around or just crash in the first empty bunk you find. Everyone always knows that so it's never really an issue.
"But on one tour there was someone asleep in one of the bunks on our bus, and we were all completely freaked out because it was this strange person none of us knew! I can't remember how we did it, but we managed to wake him up and kick him off the bus, but that was definitely a strange situation."